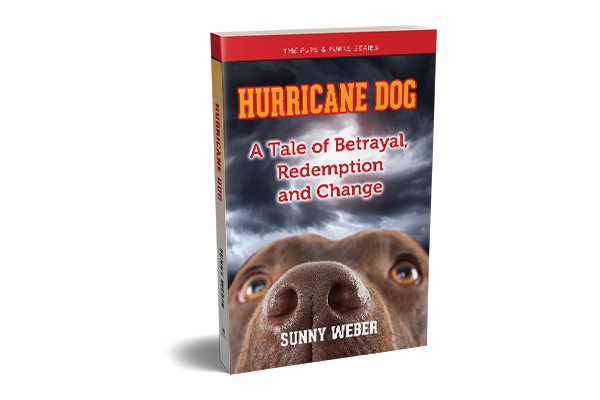 Hurricane Dog: A Tale of Betrayal, Redemption & Change is a middle-grade fictional story about one boy and his dog. Being forced to leave his beloved dog Gator behind when he is rescued during a hurricane, the boy Gavin finds meaning in his own life as he comes of age. The boy’s personal struggle and determination to change the world for people and pets reflects true events and subsequent changes to federal natural disaster preparedness planning.

This second in my Pups and Purrs Children’s Book Series had been on my mind since the disaster of Hurricane Katrina in 2005. Subsequent natural disasters in the intervening years included earthquakes, tornadoes, forest fires, floods, avalanches, mud slides, and tsunamis around the world. Pets, livestock, and wildlife have suffered in each tragedy—often because of human lack of planning, neglect, and sense of omnipotence. But many have been saved by people of compassion who cared, planned, and took action.

Imagining myself in the position of the animals who were tragically abandoned lead me to create Gator, the maligned pit bull mix and Gavin, the black boy of an impoverished Louisiana parish. I also purposely chose an authentic historical event, so that true events could be realistically mirrored.

Following the surprisingly large number of boy readers who loved my first children’s book, The Dog at the Gate: How a Throwaway Dog Becomes Special, I wanted to specifically write a book for boys. I also wanted to reach out to children of color. I knew to capture the interest of today’s children, there would have to be adventure, conflict, and emotions they could identify with. Regardless of ethnicity, children grow up searching for their own identities. How do I fit into the world? How can I matter? Both Gavin and Gator struggle with this universal dilemma.

Children in underprivileged areas can be easily discouraged and often do not have advantages of education, positive community involvement, and familial support. It is difficult for such children to go on to develop and pursue dreams outside what they see in their immediate environment. I wanted to show that conscientious goal-setting and education can result in contribution and personal meaning. Anyone can change the world.

To tackle the grown-up complexities of natural disaster in a story that would hold beginning readers’ interest, and teach humane lessons, I chose the viewpoints of rejected Gator and puppy-mill survivor Magnolia. These two helpless dogs had only each other for the majority of the book’s adventures. I tell the tale of how they saw what happened.

By seeing through the dogs’ eyes, young readers will hopefully emotionally embed themselves in the events of the story, thereby instilling empathy for pets. If children can be helped to see through the experiences of others, they may develop the adult characteristics of empathy and compassion. Gator also learns that his initial interpretation of Gavin’s abandonment of him may have repercussions similar to the prejudice he experiences due to peoples’ preconceived notions about his breed.

For only when we can put ourselves in another’s position, will we truly understand how our own actions ripple outwards to affect everyone around us. Awareness of the “other” is indeed a crucial stepping stone to responsible adulthood. Ill-informed, immature snap judgements can limit our experiences and close our hearts to love. Gavin and Gator grow up together and then apart, but each arrive in the mature world of understanding and forgiveness.