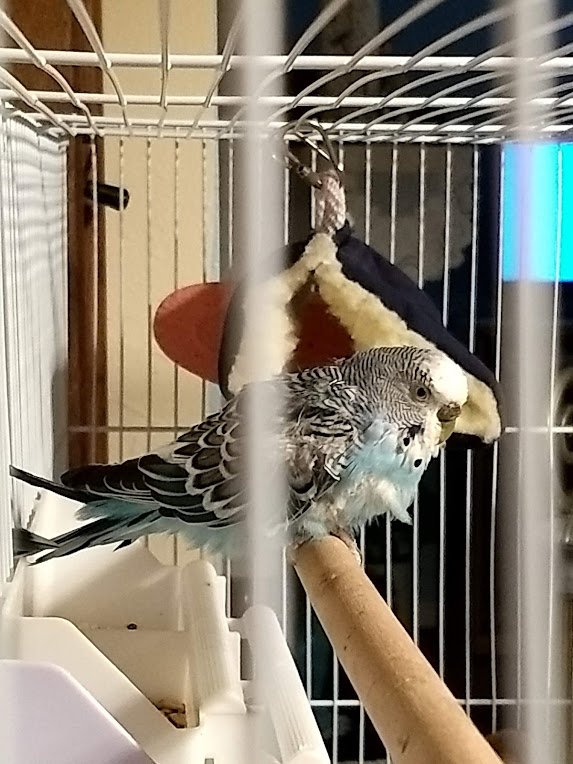 I did not know Daisy long. We met in July, 2018. I had received a call from a bird rescue friend, Heather, pleading for me to check out three parakeets that were in need of help. My friend lived far away and I lived close to where the three birds were. I contacted the owner, a 95-year-old-woman who had suffered strokes. She was unable to keep her three budgies and wanted to give them away. This did not sound like a “rescue” to me, but more of an “adoption.”

I had two of my own parakeets and did not want more. I am not a bird expert but did try to help Heather when I could. She and I met after I saved a Flicker woodpecker from a Cooper’s hawk one Christmas Eve morning. Heather’s passion for wild birds caused her to sacrifice her life to baby hummingbirds, injured Flickers, and any other bird in need. Heather did not usually work with pet birds, but her overriding compassion forced her to step into this case.

I visited the elderly woman in her senior apartment and she eagerly foisted the three parakeets, their large cage, and boxes of toys and food upon me. She had been a “hobby breeder” and two of the birds were mother and daughter. Daisy was the mother. As I brought the birds to my car, a neighbor man helped me and whispered, “Thank you for saving these poor things from the home from hell.” I did not know what he meant, but all three birds were in rough shape.

Daisy was missing whole patches of feathers, her black skin was exposed, and the feathers she did have were broken, askew, and dull.  The lady told me Daisy was ten; I had never seen a parakeet that old. Usually American Budgies die of cancer by the age of five. No one knows why. Daisy and her daughter, an eight-year-old, both had visible tumors. The third bird, Sweetie Pie, was young, still with pink legs and bright plumage. The last thing the woman said to me as I loaded the cage in my vehicle was, “She needs a man. Look at her.” She pointed to geriatric Daisy. “You should breed her.” I could see why she was no longer able to responsibly take care of her pets.

Once home, I cleaned the filthy cage, scrubbed the disgusting bowls, and threw out all the out-dated food and treats the lady had given me. I slowly switched Daisy and her companions to nutritious foods, and kept them in their own home cage. They were curious about my own birds and all of them spent days singing to each other. I put the new birds in the sun room where they could look out over the yard, instead of staring at boring apartment walls. I added and rotated toys for their mental and physical stimulation.

Daisy’s feathers never did improve, but she had a good quality of life. Heather came and trimmed claws, which had grown so long they curled, making perch grasping tenuous. She shortened beaks, so the neglected birds could actually eat the good food I provided. Unexpectedly, the young bird died. Apparently she was not able to overcome the long-term neglect she had experienced. Daisy and her daughter, Daffodil, seemed to hold their own.

Both birds’ tumors continued to grow. In November Daisy lost the use of her right leg and foot, a common result from back or kidney tumors. She fought valiantly to hang on to perches and not fall. She became weak and had difficulty getting around the cage. I provided a rest platform (which she never used), and placed water and food in easily accessible locations. Finally, Daffodil began picking on Daisy—bullying and dominating her. Daisy fought back but was physically unable to defend herself. I placed Daffodil in my birds’ cage, where she seemed pleased to be with birds her own age and activity level. She did not seem to miss her mother.

Yesterday, Heather put Daisy to sleep. Even in her last moments Daisy fought. She bit. She squirmed. She flapped her weak wings. Her instinct to fight back from the hands that would kill her was strong, even though her body was not. She was in obvious pain, but she courageously fought that too. It was time to let her find peace.

Her death made me sad. She was just a parakeet, but I cried at her absence. No one but me would remember her daily fighting spirit. She taught me how to face adversity, pain, physical losses, bullying, and the bravery to deal with one’s own decline. Even though she only had one good foot, she refused to give up and go to the bottom of the cage. She was a perch bird, a bird of flight, a parrot of strong bite. I admired her.

Now she soars in the heavens.

I am left here, in this tumultuous existence, to ponder the significance of a tiny parakeet that to most would have held no more than a moment’s notice. Her life came and went with only songs and squawks. She did not change the world. She was caged from the moment she was born to the moment she died. Yet she was here.

She influenced me over the months as I watched her decline and battle against that inevitable dive we all take out of life. That minuscule creature showed me how to age. Did her life matter? To me it did. She will be in my heart and memory until my own demise. Then perhaps we will soar together.