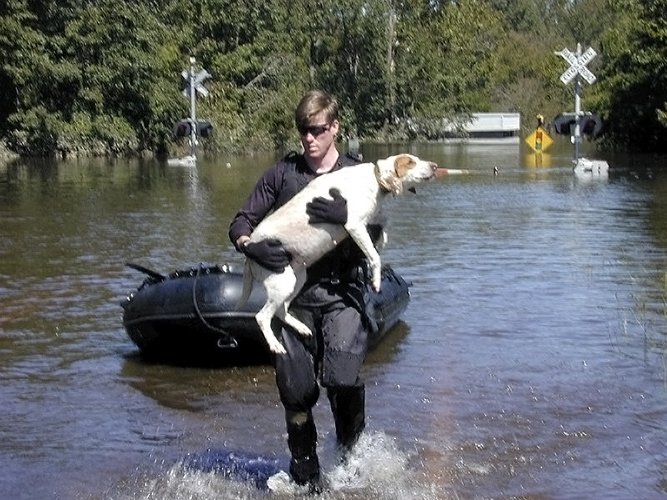 February 2, 2019 / Sunny Weber
In the early morning of August 29, 2005, Katrina struck New Orleans with the full force of a category five hurricane. The violent storm battered the city and the surrounding levee system, causing it to break within hours. Sea water poured onto the streets, flooding 80% of the city within two days. The hurricane was a disaster for both people and animals.

No Laws For Pets 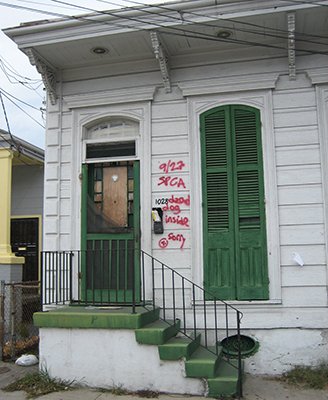 At the time, there were no laws that required that animals be evacuated, rescued, or sheltered in an emergency.

Evacuees who were fleeing the storm were traumatized as authorities refused to allow their pets or service animals onto boats or buses. Animal companions were left behind, forced to face the rising flood alone.

As many as 600,000 frightened, starving, and dehydrated pets sought refuge on rooftops or in attics. Estimates suggest that up to 250,000 animals may have died by drowning, starvation, dehydration, disease or heat in the aftermath of Katrina. After the storm abated, Animal Control and animal rescue groups were able to retrieve about 26,000 animals. Many were adopted by a new family in other parts of the United States and even in Canada, never to see their original owners again.

Fearing what would happen to their pets, some people chose to weather the storm at home, putting their own lives at risk. The experience of Katrina pitted people’s attachment to their pets against government officials’ unwillingness or inability to provide for animals in an emergency. In a Zogby poll, 61% of pet owners said they would refuse to abandon their pets in an emergency. (Credit: https://www.animallaw.info/article/detailed-discussion-state-emergency-planning-laws-pets)

Following Hurricane Katrina in 2005, thousands of people demanded that the federal government, through the Federal Emergency Management Agency (FEMA), address the additional trauma for natural disaster human victims who, in addition to losing all their material possessions, also suffered the losses of their beloved pet companions.

Due to overwhelming national outcry, in 2006 the United States Congress wrote the bill that includes pets and service animals in rescue efforts of their people. The case did not go to the United States Supreme Court, as Hurricane Dog: A Tale of Betrayal, Redemption & Change tells. However, all children should be aware that they can change the world, with education and dedicated service to others.

For more information regarding the history, occurrence, data, and aftermath of Hurricane Katrina, the storm this book is based on, interested readers can go to the links below.

Hurricane Dog: A Tale of Betrayal, Redemption and Change 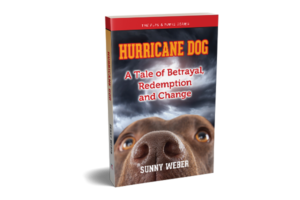 New Orleans after Hurricane Katrina: House in Bywater neighborhood with inscription “9/27 SPCA Dead dog inside Sorry” – By Infrogmation – Own work, CC BY 2.5, License