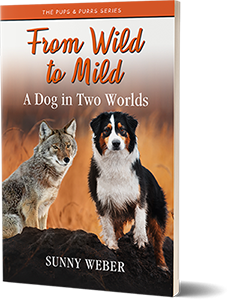 Children are buffeted in overwhelming directions during their formative years. There are so many options and expectations from society that many children founder in trying to discern how grow up to be the best they can be.

Coming-of-age books address emotional and social challenges that all children face, often beginning at the so-called “middle-grade” years (8-14). Despite supportive adults, most children learn to bury their insecurities under the inability to articulate discomfort. Children with unsupportive or absent adult leadership are even more hindered.

My goal with all my books’ characters is to provide fictional animal friends who experience what children do, such as bullying, ridicule, rejection, insecurity, and the universal seeking of where to belong. Finding your true self is difficult work, even as an adult. Beginning on the journey of self-discovery as an emotionally developing young person can be daunting and confusing.

I wrote this book to address the main theme of the importance of searching for your true self, regardless of setbacks and roadblocks from situations and other people. Everyone has inborn talents and interests and one will be happier if those traits are discovered and adhered to. Being true to yourself is crucial to the development of higher character attributes.

In DTW, protagonist Kaya, a dog who is raised by coyotes, struggles to figure out how to force herself to become a wild canid. But try as she might, she cannot take a life (she’s an Australian Shepherd—a herder whose instinct to kill has been bred out of her breed), and she can’t stay awake for night hunts (she’s a dog, after all). Kaya finds other ways to contribute and finds the value of mother love and sibling companionship.

Her father, however, is an unscrupulous, bullying, meanie who constantly berates her. He nicknames her, “Worthless,” and is incapable of seeing beyond what he sees as her failures. Early on, Kaya recognizes that her father has no morals or integrity. Even if she can’t identify his faults cognitively, she emotionally senses he is not worthy of respect. For a while, she is conflicted—she knows she should revere him as her father, but his lack of admirable characteristics negates any attachment to him or his ways.

Children who live with similar emotional and physical abuse by parents struggle as Kaya does to reconcile society’s push to honor thy father and mother, with the contradictory push to idolize positive role models in the adults around them.

Such children either mimic the cruelty they see and experience—often turning to violent “acting out,” such as animal abuse; or collapse into “learned helplessness” and timidly accept bad treatment; or purposefully seek out alternative guidance and lifestyles opposite of the ones they have been imprisoned in.

Animal abuse usually begins in frustrated, non-verbal, unsupported children in the middle-grade years, when children first discover their own power over those “below” them in the family food chain, which are often pets. Multiple studies have shown that without intervention, animal abuse always escalates into violence against people when these troubled children become adolescents and adults.

By utilizing “first paw” (person) telling, I strive to help young readers see the world through the protagonist dog’s eyes, mind, and heart—thereby tapping into inborn empathy, before the world teaches that child to bury his or her kindness. Having the dogs go through conflicts young human readers may experience first-hand, I hope that my audience can see there are other ways to deal with frustration, trauma, and betrayal.

Like Max and Gator, the stars of my other children’s books (see www.sunnyweber.com), Kaya battles her own innate demons. Yet she wants to emulate her courageous and kind coyote mother, and reject her cruel, closed-minded father. I wanted to show children that just because you are born into certain circumstances, you do have choices in whom and what you ultimately become.

Ultimately, Kaya must leave the family she can’t truly belong to and find her own way—utilizing her inborn talents and to learn skills that fit her nature. Just as children grow up and must leave home to strike out on their own, Kaya faces her future—sometimes with courage, sometimes with fear. But she knows there is no home to return to, until she finally finds she is at home within herself.