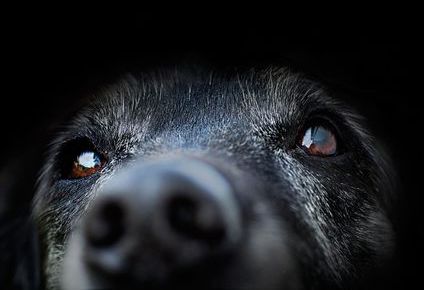 Dogs over the age of twelve weeks fight an uphill battle to accept new stimuli and experiences in stride. Those first weeks are the prime time to “socialize” a pup and exposing her to as many scents, sights, sounds, and cognitive stimuli as possible will give that little one conditioning that will make the entire rest of her life less of an anxiety producing gambit.

It is admirable when people take older dogs into their homes and hearts .  Mature dogs stand less chance of that “forever home” than the mold-able, snub-nosed, fluffy, adorable little ball of wiggles that most people want. Older dogs are “what you see is what you get”–hair coat is easy to see, temperament is more obvious, size is determined, and energy level easier to match to potential adopters. Yet many benevolent  owners of adult canines have no clue what their new friend has been exposed to or what fears or phobias the dog may arrive with.

New partnerships take time to solidify. Patience, tolerance, awareness, and desire to ease a new pet’s way into their new world will benefit the dog and the person. The main rule of thumb in dealing with dogs who haven’t had the benefit of early exposure to many of life’s routine environments and happenings is: “Take baby steps.” If a dog shows anxiety towards something in his world, let him investigate on his own in his own time.

Gradually expose the dog to new things by: 1) distance from a feared stimulus–which will then be slowly shortened; 2) time–let the dog tell you when he’s had his fill–never force longer exposure than he’s comfortable with; 3) intensity–low volume, slower movement, controlled lighting can slowly be increased as the dog shows less stress reaction. Distance, Time of Exposure, and Intensity can not be increased at the same time. Desensitization and habituation must occur in each area separately and never together. Only when success is achieved in one criteria can another be addressed.

For example: 1) A dog previously confined to a small six-foot wood fenced yard  may show fear of large areas. Don’t turn the dog lose in your large chain link fenced yard. Allow the dog to investigate on leash with you at his side–at his own pace. Follow the dog, do not lead him or pull him around. Let him determine how to proceed with his investigation. Above all, don’t abandon him alone in the yard. Think of how a toddler child sees the grocery store. . .would the mother abandon the child in the toy isle while she shopped?

2) If a dog has not been inside a house there are myriad stimuli to become accustomed to. Substrates or flooring–tile is different than carpeting which is different than hardwood. . .scents from the kitchen contrast with scents from the closet or bathroom. . .lighting in the office is of different intensity than that of the kitchen at mealtime. Try to see, hear, smell, and feel the variety of air currents, scents, feels, and brightness that a new dog is placed within and help that pet adjust to household stimuli.

3) Often dogs have never been alone. Kennel life, shelter life, backyard life–may have provided the dog with much company of her own species. Once adopted, she may be expected to stay alone for hours in a home or crate. . .which can prove to be frightening for any dog. Dogs are a social species and they are not cognitively or emotionally equipped for extended isolation, without painstaking preparation and desensitization. Don’t allow intense anxiety to set in–allow gradual timings of confidence building during aloneness keep loneliness and panic at bay.

When in doubt or if problems arise that you, as a well-meaning and loving owner do not have answers for, do not hesitate to contact a behaviorist. Don’t allow the dog to wallow alone in his fear. Don’t throw the pet into a deep pool of insecurity and expect it to swim on his own. Jump in with the pet you’ve put into the soup and show him how to swim into his life with you. Teach trust by being trustworthy. Teach confidence by always being the leader and being available. Build your dog’s love by being loving. Trust, confidence, love, and physical/emotional advocacy are all basics in any fruitful, balanced, and rich relationship.

Put every effort into the care of your vulnerable furry friend that you would into your protection of your human child or awareness of your spouse’s needs. Your pet can’t and won’t leave you like others can if you mistreat or are insensitive to her. Reward that vulnerability and loyalty with the best you can be.