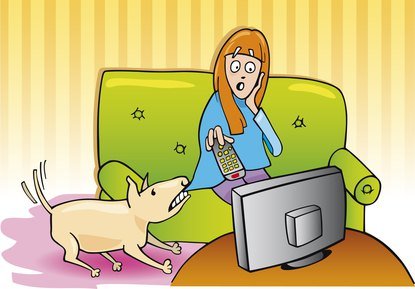 If you live with a fearful dog you’ve probably noticed he/she is sensitive to sounds. Sound-sensitive dogs can surprise their human roommates by unexpected reactions to noises that humans have long-ago become desensitized to and often are so habituated to that they don’t even truly “hear” them. But the ever-aware fearful dog takes in everything it’s unaware and distracted person does not.

One of the most common trouble areas for timid dogs is the ongoing stimulus of the television. Especially nowadays with televisions ever larger, louder, more technically able to transmit minute decibels and highly refined light patterns, sensitive dogs can easily become overstimulated with programs their people chose to constantly barrage their pets with.

Pets, especially dogs, are highly sensitive to and easily aroused by sounds of violence and angry human voices. Dogs have no way to cognitively interpret that the sounds emanated by the flat screen above their heads is fiction, it is part of their immediate environment and often results in unnoticed stress reactions. I have a large Lab-mix named Jessie. He came to me as a foster dog after he’d destroyed an adopter’s house while he was alone. He was a mild-mannered, eager-to-please guy and the shelter personnel had no ability to “test” him in a real-life scenario to problem solve the complete destruction that resulted from this panicked dog’s fear of isolation. I was asked to “take him home and see if he destroys YOUR house.” As a behaviorist and trainer I suppose they felt a miracle would occur and my house would remain intact, or I’d be proven a fraud and my house would meet the fate of the last adopter’s.

I balked for a moment, picturing my 19th century antique furniture, Victorian rugs, and French tapestries. . .even though the back part of my home was  remodeled specifically for fostering dogs such as Jessie. The deciding factor was the choice put to me by shelter personnel–I either did an in-home behavior evaluation or he’d be euthanized the next day–they were not going to take the chance on another disgruntled patron.

Jessie entered my home and my life to save his. Ironically, I never had a problem with him. He never destroyed a thing in my house. I did all the typical behavior evaluation protocols–leaving the house and sneaking around to the back windows to observe him; backing the car out of the garage then returning; driving down the street then sneaking back to the windows. . .NOTHING. I figured out a couple of reasons why Jessie never panicked in my home–there were three cats, one elderly Tibetan Spaniel, and soft classical music always with him. The shelter folks began to see me as a miracle worker–Jessie made me look good to other humans in my field of animal welfare. That was A-OK with me–although Jessie taught me exactly and plainly what he needed.

As time passed, I discovered if I stubbed my toe and muttered, “Darn!” he ran for cover. If I verbally corrected a cat for scratching the couch, it was Jessie who ran out the doggie door to the yard. If I dropped something and angrily corrected myself out loud, Jessie’s head dropped and his tail tucked–all the typical body postures of a submissive and “guilty” dog–even if the event that caused my outburst had nothing to do with him. I learned to always be careful of my language, tone, and body language so that timid Jessie could live in peace. In time his confidence grew. He became less sensitive to my behavior and he learned that each pet had a name, which I learned to use before a corrective word, so Jessie knew the correction wasn’t for him. Jessie turned out to be such a wonderful companion and partner in my work with other fearful dogs, I kept him for my own.

One thing Jessie never adjusted to though, is loud television. I don’t usually like violent shows anyway but I am an obnoxious channel surfer. Only a moment of humans yelling at each other as I pass through stations with the remote is enough to send Jessie scurrying.

So if you live with a timid, noise-sensitive dog, PAY ATTENTION to what sounds you expose your pet to. Observe their body language, facial expressions, and stress reactions when they are near during your evening television viewing. Chances are the volume and violence that disturbs your dog disturbs  your own psyche, even if you’re not immediately aware of it. Perhaps the only ramifications for you, as a desensitized human, are strange dreams at night after watching such shows. But for your dog, it can have lasting affects.

Make your goal to be the establishment of a peaceful, safe, comfortable environment for your dog–FROM HIS OR HER PERSPECTIVE. Use earplugs for violent shows if you must watch them. But always be sensitive to your dog’s sensitivity to you and the stimuli you force upon the most loyal friend you’ll ever have.