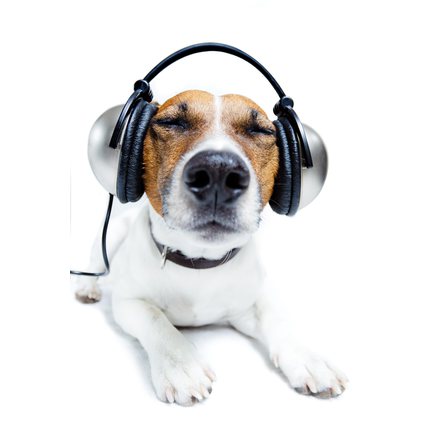 Following a traumatic brain injury in 2001 I became unable to tolerate numerous routine sounds. Every day was torture as my brain chemistry ricocheted from deep depression to anxiety to extreme fatigue. The electrical impulses that conducted rational thought, emotion control and comprehension were broken in so many places I had trouble following conversations, seeing colors, or staying awake. Irrational fear was a constant state of mind. Desperate for peace, I turned to my love of classical music.

Through the following years of recovery and therapies, I retreated often to the controlled environment of my home and my music. Throughout years of work with fearful dogs I’ve comprehended their anxieties, senses of fear, loss of control over their own destinies, and dominance by bullies–both human and animal. Studies in dogs as well as people show that the continuous presence of stress hormones shortens life by compromising physiological functions.

One of the most effective stress-reducing tools I use in my rehabilitation efforts with fearful dogs is daily on-going classical music. I’ve seen reactive, hyper, insecure dogs calm down in days. I’ve seen them fall into deep and peaceful sleep on my couch, chairs, and floor. Now there is a new study that confirms what I’ve experienced in myself and seen in the dogs I foster.

The Journal of Veterinary Behavior recently published research done by the Clinical Sciences Department of Colorado State University in Fort Collins Colorado. There Lori R. Kogan, Regina Schoenfeld-Tacher, and Allen Simon conducted a study of the effect of auditory stimulation with a variety of music. They used classical and heavy metal in various ways to study the effects on dogs which were kenneled and stressed. New “enrichment” efforts by facilities that must house dogs in kennel environments continue to search for ways to lower anxiety in their populations.

They defined “environmental enrichment” as “any technique designed to improve the functioning of an animal through modifications to the environment.”  Their goals were to help stressed dogs “handle the inherent challenges” in environments where the dogs had “lack of control and unpredictability” in routines.

Although no one knows why music affects anxiety in people or animals, studies continually prove that it does. Classical music calms and in this study showed that dogs exposed to ongoing music of Beethoven, Strauss, and Bach resulted in kenneled dogs who slept, rather than vocalizing, pacing, or other stress behaviors. The heavy metal music used was Motorhead, Slayer and Judas Priest. Dogs listening to heavy metal music showed a “significant difference in the number of observations of shaking and increased agitation, compared to those listening to classical music.

They “found that classical music has a relaxing effect on kenneled dogs, heavy metal music, in contrast, appears to have the opposite effect, resulting in increased behaviors that could be a result of stress and/or add to their stress level (i.e., barking, body shaking, and less sleep time.).”

The study concluded that classical music creates :a more positive environment for dogs for relatively minimal cost and effort. Classical music can reduce dogs’ stress levels and potentially increase the likelihood of adoption.”

Classical music should be another crucial tool in the fearful dog rehabilitator’s behavior modification programs. The quicker and more completely we can assist fearful dogs by lowering their stress levels, the more expediently they can settle into learning, trusting, and bonding with us. Dissipation of the stress hormones cortisol and adrenaline, through the environmental ambiance of positive auditory stimulation like classical music, will result in dogs that can move from constant states of arousal to dogs who can relax and begin to lead peaceful, high-quality lives.