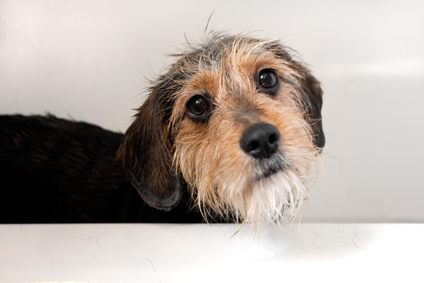 I recently boarded a darling little two-year-old terrier mix who had severe anxiety. Her devoted young owners had adopted her a year ago and were about to give up on the relationship. Initially they called me, as a result of a referral source, doubting if they were the “right” owners for this dog. It didn’t take long in our discussion for me to realize they were not only “right,” but perfect, as well. Their devotion to, patience with, attachment to, and desire to learn about, this dog and her issues were far superior to most adopters who, when a cute dog is plopped into their laps at a shelter, immediately fall in love, then bail when the going gets rough.

Like any type of falling in love, choosing a dog or any pet on the basis of “cuteness” is akin to choosing a spouse because of their financial, physical, or social attributes. It doesn’t take long for the ugly head of reality to burst the bubble of infatuation. Fortunately for this little dog, her young couple were as committed to her as to each other. I admired them from the start.

We talked at length about the dog’s “separation anxiety” (a catch-all phrase like “virus”). I offered simple coping techniques but explained I couldn’t get into detail without seeing the dog’s behavior and the relationship dynamics between her and the couple. They understood and agreed to have me come on a house call although they lived an hour away. The difficulty was that they needed a “band-aid” for a quick fix, as they were about to leave town on a brief vacation. We agreed we could begin upon their return.

A few days after my initial phone consultation, they called me back and asked if I’d board the pup. I readily agreed–it would give me the valuable time of living with her  and precious opportunity to do an extensive behavior evaluation over a period of days and nights. They were willing to drive to me for my required “meet & greet” between potential boarders and my own family pack. Then they were willing to drive to drop her off and pick her up–an additional hour of time to and from the airport (not counting city traffic snafus). This proved to me they were indeed, the perfect parents for the pup.

During our meeting & greet, I experimented with brief departures of both the husband and the wife and then both together to assess which one the dog was most dependent upon. Interestingly, her attachment to both was equal. She got along well with my dogs, although wasn’t too focused on them initially–she was more interested in the bones in the yard and sniffing around. Even though she seemed distracted, I could see she remained aware of her owners’ whereabouts and body movements. I could see high reactivity potential, but also high intelligence.

The first day with the little girl was trying–the minute she realized her people had left her (they sneaked out the side gate of the yard, as per my instructions, to avoid departure drama), she became agitated. Her anxiety escalated into varied and intense vocalizations. Nothing distracted or deterred her from pacing–a frantic attempt to find her family. It was painful for me to watch–knowing her anxiety arose from her Limbic, primitive brain and was not controllable by her–or me. I had discussed the subject of pharmacological help with her owners in our initial discussion but they hadn’t had time to research the options. Seeing the severe psychological pain this dog was in, I decided the best way to help her was to slow her brain down. I gave her half a pill of Benedryl.

With the anxiety attack in full swing, the drug had minimal effect but did help decrease her vocalizations. Six hours later at bedtime, I gave her another dose and in the morning one more. By then she’d calmed considerably. I let her sleep in the bed with me and went outside with her for large chunks of the day. As I did yard work, she became more acquainted with my dogs and another boarder. Then I could see her desire for leadership as she followed my Wheaton Terrier female around and laid near her. She began to play with the other smaller dogs and although she had a history of fear of big dogs, she quickly accepted my calm Lab mix. But the evening of her second day, I discontinued medication.

I left her with the other four dogs for brief departures on the second, third and fourth days, and she seemed to do well. A few instances of stress urination were visible upon my return, but my house is set up for such issues and after a quick clean-up and no correction, she willingly went out the dog door for further eliminations.

By the end of our four days she was a member of our pack, slept in a bed of her own choice (not with me anymore), and spent time in the yard without me. I’m hoping her owners do follow up with me for my formal written evaluation, for which I charge. I feel there is nothing wrong with this little dog that proper guidance for her owners, anti-anxiety medication, and her own family companion dog, can’t alleviate. The proper combination of habituation, desensitization, companionship of people and a dog, and pharmacological aid will avoid further “going over threshold” anxiety behaviors that may cause her people to feel overwhelmed, incompetent, guilty, and willing to give up.

My job is to keep this dog in her home, enrichen the relationship between her and her people, provide tools and techniques for quality of life for all, and above all, to save her life. I hope her people allow me to help.