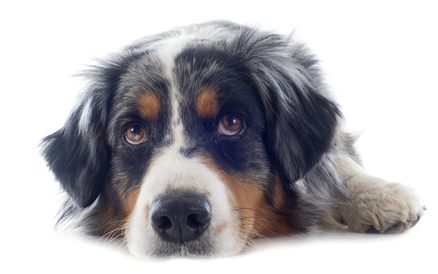 In the beginning I noticed rear toe scrapes during our long daily walks. I could hear the sound of toenails on pavement and see the thin tracks of nails before the paw print in soil. At first, I didn’t think much about it.

Miles my Australian Shepherd was almost fourteen years old and had made it through a serious back surgery at the age of ten. Some weakness was to be expected. Within a few months his exercise tolerance markedly decreased and there were occasional times when he seemed so tired one or the other of his rear feet remained curled under his leg, as though he didn’t have the energy to pull it forward and stand upon it. His back surgeon, a remarkable neurologist and orthopedic specialist, diagnosed the progressively paralyzing disease that German Shepherds are prone to. He told me Germans die within a year from the fast progression of central nervous system shutdown. No one knew about Aussie prognosis, as it was not common.

I learned of a new facility with a water therapy tank and began twice weekly treadmill workouts when Miles could no longer walk in our field with the other dogs. He made it clear he didn’t want to go with us, after years of impatience at the gate to be free. Miles seemed to love the water and once habituated to the novelty of the enclosed Plexiglas tank, the joy on his face as he walked through water with me at his head encouraging, was encouraging to me as well. Miles lived to please me so whether his efforts were for me or his own enjoyment and sense of new freedom, I didn’t know. Outside of water, I devised a soft support strap to hold up his continually weakening rear end so he could maintain his dignity and strength in the front end. We still went outdoors to potty and for short walks around the yard he used to bound around in play and race around in protection.

There came a time when Miles could no longer stand or walk, even with the buoyant assistance in water. I bought him an orthopedic bed, devised diapers from human Depends when he became incontinent, and rolled him every two hours, night and day, to prevent pneumonia. I propped him up on pillows and dragged the bed to every location in the house that I was so we’d be together for every precious moment in our now very limited time.

I worked from home and when clients came Miles was situated upon his bed and pillows in the doorway of my office so each client could greet and be greeted, as before. I thanked each person for their compassion and tolerance for our lack of “professionalism” but by then they knew my passion for this dog surpassed my concern about image.

When I needed to do yard work, I placed Miles’s bed upon a plywood platform on wheels and pulled him to my chore area. Every morning I pulled him out to his favorite tree and bathed him on the grass with warm water and sweet smelling shampoo and conditioner. I had hooked up a hose mixer from the kitchen sink and ran it out one of the back doors so his aging body, although quickly losing ability to feel, was slathered in comforting warm water and my adoring massage.

The paralysis progression brought with it spasms and rigidity, before the final limpness of a fully paralyzed area so I spent hours massaging in efforts to relax the rebellious muscles. It was as though they themselves knew they were dying and insisted on fighting that death by futile efforts at convulsing in protest. I touched and prayed over every cell in my friend’s body and mourned a thousand times over every lost nerve as it shut down.

We made many trips to our wonderful veterinarian and I had an ongoing dialogue with him over the phone. What should I expect next? When? How would I know when it was time to let him go? I couldn’t bear the thought of living without my soul mate, yet I also couldn’t bear the thought of making him suffer for my own sake. The vet assured me he wasn’t in pain, and that when the paralysis reached his heart, lungs, and throat it would be plain.

One morning I awoke to no light. The light in Miles’s eyes was gone. The light in my life was extinguished. I made arrangements for an at-home euthanasia and cried until there was no more moisture in my body to make tears. He couldn’t swallow food, and therefore chose not to eat. He gasped for air and I could tell his lungs were turning to cement. His color was drained and I could hear the telltale rattles of pneumonia in his chest.

Miles’s last day followed a night of cuddling. All the cats, the other dogs, and I laid on the floor with him. They slept around him while I contemplated the coming hours, our separation, and our loss of a noble, courageous, and humble creature. In his youth, Miles was a celebrated obedience competitor, therapy dog, assistance dog, Pet Partner, and had been awarded a life-time achievement award from Delta Society. He had saved the lives of a cat, a dog and me in various traumatic scenarios. He’d been my best friend, son, soul mate, and protector for fifteen-and-a-half years. It took the paralysis a full year-a-half to take him, longer than was expected by area experts.

The morning brought a beautiful sunrise although with it no joy. I proceeded in our usual routine so all the animals remained unalarmed. After his bath under his tree, I lay down at Miles’ side and stroked his freshly bathed fur. The baby fine strands of his guard hairs shimmered as the silent late summer breeze caressed him at the same time I did. The leaves of the towering ash tree we lounged under caused a speckled strobing affect of sun and shade on us as they waved overhead in the moving air.

Two rabbits hopped out of hiding and chased each other around us. Three squirrels joined in the race but added up and down scratching routes through the pines and locust trees. Magpies, blue jays, red-winged blackbirds, sparrows, and chickadees flitted from the trees to the feeders and back out to the field behind our green carpeted yard.

Miles sighed in his sleep, twitched his nose, and pumped his semi-paralyzed front legs in a fantasy memory of youthful years when he could still walk and run and threaten he creatures we shared our yard with. The sky beyond the tree canopy was azure blue, the clouds white pillows for the angels who would soon arrive to take my pal away from me.
I watched all nature come close to us to bid adieu to one of their own on that perfect day.

Quietly I let tears slip onto Miles’s noble head. I was grateful for our fifteen years of soul sharing, and felt honored by my inclusion in this great farewell of the wild things. It was a good day to die, as the Indians used to say. I envied Miles yet mourned our lives’ forking pathways. What I would have given to follow Miles as he always followed me—yet the angels rejected me.

The vet arrived, and I held Miles to my heart. I saw a spirit float in a kind farewell; a mixture of the seven-week old puppy I had originally met, the strong beautiful dog in its prime, and the aged senior I still held in my arms. As death came, Miles’s face relaxed. Only then did I see how much discomfort he must have been in for as his face fell into his final sleep, he looked like a slumbering puppy. It was then I realized I’d made the right choice at the right time. We’d played all the cards we were dealt and now it was indeed the correct, humane, and selfless time to fold.