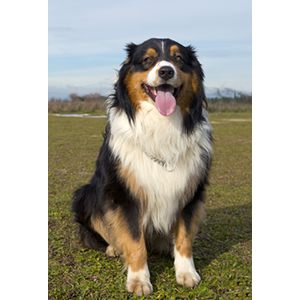 When my nine-year-old Australian Shepherd, Miles, began to have difficulty breathing I was told by our veterinarian that it was, “Just the way old dogs breathe.”  Then he began panting constantly, even in cold weather. He stopped going up the stairs to the bedroom at night, preferring to lie on the floor at the bottom of the staircase on the cool slate. He wistfully looked up at me as I ascended the stairs for bed each night as if to say, “I really want to be with you but I just can’t.”

Miles always stuck to me like glue but my “velcro” dog no longer followed me from room to room. As long as I remained on the main floor of our house he was with me, but he always stopped at stairs, whether going up or down. When I was able to entice him up the stairs with hot dogs, he arrived at the top threshold gasping for air. So I resigned myself to the fact that he would never sleep on his bed next to me at night again.

His panting began to sound as though he was sucking air through a hollow pipe when he inhaled. Then the sound got louder and occurred whether he was inhaling or exhaling. In the summer he became lethargic and his body radiated heat. All he wanted to do was lie under the swamp cooler vent. I could tell his deep panting was not cooling him. I stopped walking him during the day and only went out in the summer’s twilight. I took him to another veterinarian for another opinion and again was told it was nothing to worry about.

His bark began to change. Instead of his protective deep booming warning to intruders, his voice was raw and raspy. I sought yet another doctor’s thoughts and was told all dogs’ voices change with age. When his gums began to pale with slight exertion, I decided to become bolder in my search for help. It was obvious my dog was not getting enough oxygen. Something was interfering with his breathing and his body temperature control.

One day in desperation I sat down with the phone book and looked for specialists. I called three doctors and two returned my calls with no encouragement. The third doctor spent a full thirty minutes asking me symptomology. His final question was, “Has your dog’s bark changed?” I almost fell on the floor. He then explained that he wanted to see my dog as soon as possible to examine him for a phenomenon known as “Laryngeal Paralysis.” I was dismayed to be told that this disease could kill my dog.

Two days later I met with Dr. Glen Rouse, the wonderful veterinarian who seemed to finally know what was wrong with my devoted old Aussie. The diagnosis was indeed “Laryngeal Paralysis” or “LP.” Dr. Rouse explained what LP was, told me there was a surgical correction for it and that his wife was the specialist in their office in this “soft tissue” problem. He also told me Miles was not at a stage crucial enough to operate on but since LP is progressive, we should keep a close eye on his deterioration. He sent us home with instructions on how to care for Miles during the deterioration time.

I should never walk Miles in temperatures over 70 degrees. If it was a hot day I must make him come into the house and keep him cool with ice in his water and the swamp cooler on. I must let him set his own pace on our walks, stay on flat terrain, and if he did not want to go, to let him rest. If there was a high pollution day, he was to be kept indoors. I should keep his bowls elevated. If I needed to get him upstairs for a bath, he should be carried.

Over the next year and a half I kept regular appointments with Dr. Rouse. We finally met Dr. Wykes and I found her to be informative, concerned and professional. Miles took to her right away so I felt comfortable putting him in her hands.

She performed his surgery a week later. She made an airway in Miles’ throat by removing one laryngeal cartilage and one vocal cord. She worked with skill and speed. He was then thirteen years old and she and her staff were attentive and careful with everything from the anesthesia to his recovery. Two days later I was able to take Miles home and I immediately saw a difference in him.

Miles’ eyes were no longer distant and unfocused but bright and attentive. He slept much less, he was more playful, and he wanted to go for walks again. The signs of mental dementia I had begun to see in him disappeared. He no longer panted except when he was hot, and then the sound was normal. His voice was gone because Dr. Wykes had to remove one vocal cord but she reassured me studies had proven dogs do not seem to be affected psychologically by loss of voice. Best of all, Miles actually galloped from one end of the back yard to the other chasing the mailman again!

Laryngeal Paralysis is the gradual loss of elasticity in the laryngeal cartilages on both sides of an animal’s airway. As these cartilages harden they collapse and cover the airway, obstructing the animal’s ability to move oxygen and carbon dioxide in and out of the body.

Laryngeal Paralysis can occur due to a) congenital predisposition, b) acquired forms (idiopathic, traumatic, polyneuropathic, or iatrongenic).

Early signs of Laryngeal Paralysis include:

Most advanced signs include:

Laryngeal Paralysis surgery involves removing the laryngeal cartilages that are obstructing the airway. There are four current surgical options but Dr. Peg Wykes of Colorado Veterinary Specialists pioneered the technique that is most successful with the least likelihood of post-operative complications while she was a professor at Colorado State University’s Veterinary College.

Dr. Wykes’ technique involves gas anesthesia administered while the animal is breathing through a tracheotomy tube lower down in the throat from where the laryngeal area is. The advantages of the tracheotomy are: air can pass in and out below the surgical site which is less functional due to the obstruction of collapsed laryngeal cartilages; gas anesthesia can be administered through the trach tube so the surgical area is clear; the surgeon therefore has more room to work and better visibility of the area; the possible aspiration of blood and fluids during surgery is lessened.

Dr. Wykes performs the surgery through the mouth in which she removes one side of the affected laryngeal cartilage and one vocal cord, thereby physically opening a wider airway for the animal. Stitches are not necessary once the opening has been accomplished. Occasional capillary bleeding may be experienced but cauterization of the capillary is successful. The average surgery takes less than one hour.

Most of the time, the muscles of the neck contract so no stitches are needed to close the opening. Sometimes in very old dogs the skin and musculature has loosened and therefore makes stitching necessary. Stitches are removed 7-10 days after surgery.

The dog is sedated to keep it quiet and inactive during the first two days of hospitalization. Normal food is offered and water or ice cubes are available, as the dog desires. Inhalant aspiration that can result in pneumonia is a minimal risk with this surgical approach.

A broad-spectrum antibiotic is given at the time of surgery, during hospitalization, and for five days at home. Corticosteroids are used to cut inflammation in the laryngeal area while the site of surgery heals. Dogs may be fed 12 to 14 hours following surgery although sloppy foods should be avoided to reduce the risk of aspiration and pneumonia.

Immediately following surgery and for a day or so afterward ice cubes in a bowl will hydrate the dog without danger of aspiration. Coughing and gagging are normal responses after surgery and may continue indefinitely.

Exercise should be limited to short walks on leash in the yard when the dog needs to relieve himself. No running, playing, or barking should be allowed for two weeks after the dog returns home. If removal of one or more vocal cords was necessary to widen the airway, the dog may be permanently debarked.

Laryngeal surgery is a permanent correction so further deterioration does not occur. In older dogs, corrective surgery provides more oxygen and less effort to breathe. Cyanotic crisis is no longer a potential problem. Muscles strengthen, possible senior dementia improves, the dog becomes more alert and sleeps less, and quality of life is improved.