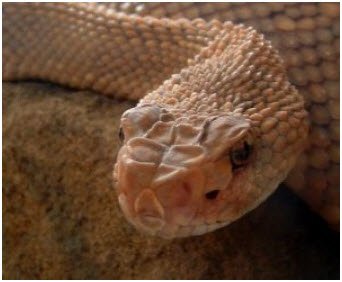 I pulled into the prairie training field and drove around people and dogs. Some were sitting under shade trees, some dogs were playing in kiddy swimming pools or being hosed down in the hot late spring sun. A small group of people were gathered under a tent and were listening intently to a pony-tailed older man in a ragged straw hat with the top sliced off.

Then I saw a lone dog with two trainers in the middle of the field wandering from one shade umbrella to another. Under the three umbrellas, among the field grasses, lay three enormous rattlesnakes. Next to each snake was a pile of ice, available for the reptile to cool its body as it needed. The lone dog student was on a long-line leash accompanied by a handler. Walking close by and watching the dog, was another trainer holding an electronic gadget with an antenna. The yellow lab I saw first trotted around, carefree and bouncy, as labs do. Suddenly his ears went up, his neck arched, and then his head dropped to the ground, nose thrust out. I heard a shrill squeal and saw the lab rise up on his hind legs and bolt away—to the end of the long line.

Under the main tent, Fred Presson, the third trainer, explained to the dog’s owner, a fidgety young woman, “We wait until the dog is completely focused on the snake and then shock him. To the dog it seems as though the shock came from the snake. The first and second stations are snakes who are muzzled so they can’t bite, but can coil and shake the rattles on their tails. The dog will learn that sound means a shock, so they will avoid it in the future.”

By the second umbrella the yellow lab cautiously crept behind the handler. Fred continued, “We use unknown handlers so the dog doesn’t associate the correction to the owner.” The anonymity of an unknown handler maintains the dog’s trust in his owner so their relationship isn’t damaged. It also contributes to self-learning, so the dog will learn to avoid snakes even when the owner is not visible or present.

The lab circled the snake under the second umbrella, which had slid back onto the ice pile to cool itself. It was clear these men took care of their snakes, as well as their dogs. Although coiled upon the ice, the snake’s head and uplifted rattling tail were clearly visible and audible. “As long as the dog reacts by avoidance, there is no shock,” Fred reassured the anxious owner. She explained she had found a rattlesnake in her back yard just days before. She’d been keeping her dog inside since.

The third umbrella shaded a muzzled snake that also had the rattles on its tail taped silent. “Now we’ll see if your dog recognizes the sight of a snake. We want to train the dog to avoid the sound, sight, and smell of snakes,” said Fred. The lab, once again confident and playful, bounced up to the coiled but silent snake, stared, and stuck his nose in for a curious sniff. In an instant another squeal told us he’d been taught to keep his nose to himself.

“It’s better to get a shock than a bite. Now let’s see how he does with scent.” The dog was led upwind to a net bag on the ground. Inside the net were shed snake skins. He crept in a big circle around the bag, head hung low and head turned away. “Good, good. He’s learned,” said Fred.

When the lab saw his “mom” he flew down the hill, dragging the professional handler at the end of the long line leash. Stressed, but none the worse for wear, the reunion was a relief for both. Later, after he’d calmed down, the lab would be lead through the course backwards—from scent to sound–for proofing.

The final test was a recall through a short fenced run with a rattlesnake placed in the middle of the dog and his owner. When the young woman called the dog, the lab hesitated, looked from trainer to handler, and back at her. Then he dodged to the right, tucked his tail, and ran completely around the short fence barricade; a circuitous but safe route to her call. The handler, still clutching the end of the long leash, stumbled behind.

“Dogs need to be proofed once a year for a couple of years to reinforce their learning,” explained Fred. “I hope we see you here next year.” The lab’s owner nodded enthusiastically. Later she told me, “I feel so much more confident that my dog will avoid snakes who wander into our yard even if I’m not there. I lost a dog to a snake bite once and I never want to go through that agony again. This dog is my service dog and he’s everything to me.” It’s no wonder Fred and his team find their work rewarding enough to devote months on the road each spring, summer and fall.

Rattlesnake bites are painful, and expensive to treat—from $2,000 to $10,000. Even if treated with antivenin, many dogs don’t live. Although there is an inoculation available, “it only buys you time by slowing the venomous process, which allows you more time to get the dog to a hospital,” Fred explained. “It doesn’t make the dog immune. And for smaller dogs, or a bite from a large snake, a bite can still be fatal.”

Multiple bites, which are common with rattlesnakes, can be fatal, regardless, because often the second and third bites hold more venom than the first. If a dog is bitten near an internal organ, the antibodies of a vaccinated dog won’t have time to find and neutralize the toxins. Necrosis to any area bitten can cause permanent nerve damage, especially to limbs.

Consequently, a combination of vaccination and avoidance training is the key to keeping dogs safe and alive during snake seasons. In areas where snakes do not hibernate, year-round danger makes twice-yearly vaccines needed. Rattlesnake habitats are as varied as the species, so research your area’s topography and consult with your veterinarian and local wildlife experts to determine your own pet’s vulnerability. As your dog’s caretaker, it falls to you to protect the unknowing pet from danger.

Also, snakes are yet another reason to keep all CATS indoors or in protected outdoor areas if they must venture outside. Although it is thought the vaccine actually works better in cats than dogs, it remains unlicensed for use in cats. If you feel your cat is in danger (and you refuse to keep the cat indoors), discuss the pros and cons with your veterinarian.

HORSES now have their own vaccine so if you are a multiple pet owner, consult with a knowledgeable equine veterinarian.

Also, be sure to know the ways to protect YOURSELF. Common sense, knowledge, and awareness of your surroundings can keep you, your dog, cat, and horse safe to enjoy all the activities you share.

Fred Presson and his team travel during active snake seasons throughout the southwest. For more information contact: www.highonkennels.com and/or highonkennels@gmail.com.