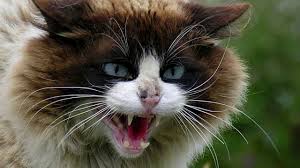 I recently received this inquiry from a reader after he read my blog, Springtime Cat Wanderlust:

I have a young male cat (1 year and 4 months old) and he hasn’t been neutered yet, so every other day he went out and came back after 1 – 2 day intervals. However on June 12 he was hit by a running car which thankfully only left him only with insignificant injuries (apart from a tilted head, from which he was steadily recovering).

Nevertheless since then he’s been kept at home (often forcefully, as he’d make a dash to go outside every now and then but was swiftly brought back in), and nurtured back to good health. However in the last few days he was getting extremely restless and used to shout a lot to get out hence on June 8 around 11pm or at 12 am we let him go outside thinking he’d be back at very least next morning or the day after maybe. However, it is currently (July 11th), third day since he’s been out, and he has yet to be back. I have searched for him in vicinity, but to no avail.

Is it likely that given the cat was literally forcefully kept inside for almost a month, now that he went out, is it likely that in his first significant outing in a while, will he take his time before returning, considering from what I know this time is the ideal time for ‘wanderlust’ and sexual urges to surface in male cats? Furthermore, I also fear that given he’s been reared on only cat food, in his extended stint outside, he may go hungry.

He wears a collar at all times, but is it likely that he may be stolen? I’ve been getting distressed over what had happened to him, and hence am (desperately) seeking answers.

Gosh, there is so much to say in response to your questions. . .let me begin by advising you to neuter your cat ASAP–for many reasons. First, as you’ve found, seeking mates and fighting are driven by testosterone, which is rampant in cats the age yours is. There are FAR too many homeless cats–thousands of kittens turn up in shelters every spring, summer and fall. Cat breeding season is just about year around now, with Global Warming and artificial lighting in homes.

In addition, more cats and dogs die of cancer than people, and many of those cancers are of the reproductive organs. I just lost a cat to breast cancer in December (see my blog on Lillie Langtry). She had been a stray that I found and took in, but even though I spayed her immediately, the hormones had already predisposed her to the cancer, which showed up nine years later.

Reproductive organ cancers are often hard to detect, usually very aggressive, and quite expensive to treat–even if there is hope of saving the pet. Spaying and neutering early saves cats and dogs from these diseases and many others. Also, “fixed” pets don’t wander as much, don’t seek out mates and are therefore tamer and more attentive pets towards their people.

Intact males fight often and not only will you have to treat injuries sustained during those conflicts, you will also run the risk of your cat catching FIV (cat AIDS) which is transmitted from infected saliva to blood–as in a deep bite. Your cat will also be exposed to the highly contagious Feline Leukemia Virus and/or FIP–Feline Infectious Peritonitis. Both of these diseases are death warrants, with no treatment or cures currently available.

A neutered indoor male cat is not exposed to these and many other diseases that are airborne, and can be caught without even coming in contact with infected cats. There are also parasites (fleas, ticks, etc) and diseases in soil such as Giardia. All these illnesses are expensive to treat and may cause permanent damage to cats’ livers, kidneys, etc.

Cats are stoic by nature and do not show pain or let on that they don’t feel well–until they are VERY sick. This allows secondary infections to take hold from non-diagnosed illnesses and undetected injuries. Again, such infections can be fatal, cause permanent damage, and are expensive to treat. Avoiding these complications from the beginning is good sense.

Your cat’s “shouting” is not going to stop once he is outdoors–it is his hormone-driven way of announcing he’s available for mating and/or fighting. Not only will this vocalization attract feline females, and male rivals, it will attract predators such as coyotes, foxes, raccoons, skunks, owls, and hawks. Cats are not able to defend themselves from predators and in fact, do not see themselves as the “huntee,” but only as the “hunter.” Therefore, they do not run away and are easily killed. In addition, the screaming is extremely annoying to human neighbors. Although most municipalities have no ordinances against roaming cats, they do have laws regarding noise. You could be cited, fined, and have to appear in court for multiple violations.

Domestic cats who are fed do not know how to hunt and therefore, often starve or die of dehydration. When lost (if they are chased out of their own known territories and have no idea how to find home), they hunker down in hiding and will remain until a predator dispatches them or they die of exposure, starvation, or dehydration. If they are hungry and thirsty they will often go to polluted sources and be poisoned or sickened, which makes finding them even harder, because when a cat doesn’t feel good, he hides.

Your cat has no real concept of time as we do. They live in the moment so will not “plan” to stay away longer on purpose. If your cat was recovering from an injury, he would be vulnerable to attack–all other predatory animals will seek out the weak as easy victims. The intense sense of smell that animals other than humans possess, will lead a predator to your cat’s injury smell, especially if he’s had stitches or has an open wound. Healing from a previous injury, such as being hit by a car, takes enormous physical energy and so anyone, including your cat, will have less energy to defend himself or run for home.

And yes, theft is common! Cats are often picked up by good Samaritans who think they are lost. Cats can lose their collars and some people don’t think to check for microchips. On the darker side, cat theft is part of an organized crime that is similar to Mafia-like organizations. Cats stolen from neighborhoods are usually friendly and submissive and so are gathered up, warehoused in bunches, then sold to the dog fighting cartels as “bait” animals to teach young fighting dogs to kill.

When these poor dogs (who are horribly abused to make them aggressive) successfully kill cats, they graduate to stolen pet dogs, who are also easy kills. Then they go on to the “professional” fight rings where they are put against other dogs trained to maim and kill their own kind. Perhaps you remember the furor that former Bronco football player Michael Vick caused when his “underground” fighting dog breeding kennel was raided. He ended up in jail and most of his dogs were euthanized, although a few were successfully rehabilitated into pets.

There are also very sick people who steal cats for torture and to practice cruelty on before they too, “graduate” to humans. All mass murderers in United States history started out on cats and other easy “prey” animals.

Your cat is like your child. A young child (even teenagers) don’t know when they are vulnerable, and certainly have no way to know a disease or a car or a predator (human or animal) can kill them. You must defend and protect your vulnerable pet as you would a toddler, who also lives in the moment and doesn’t connect consequences to actions. That is why cat professionals advise that cats be kept indoors or at least in secure outside enclosures (with tops to protect from aerial predators like hawks and owls).

I hope your cat comes home and that all the possible dangers that abound in the world have been avoided.