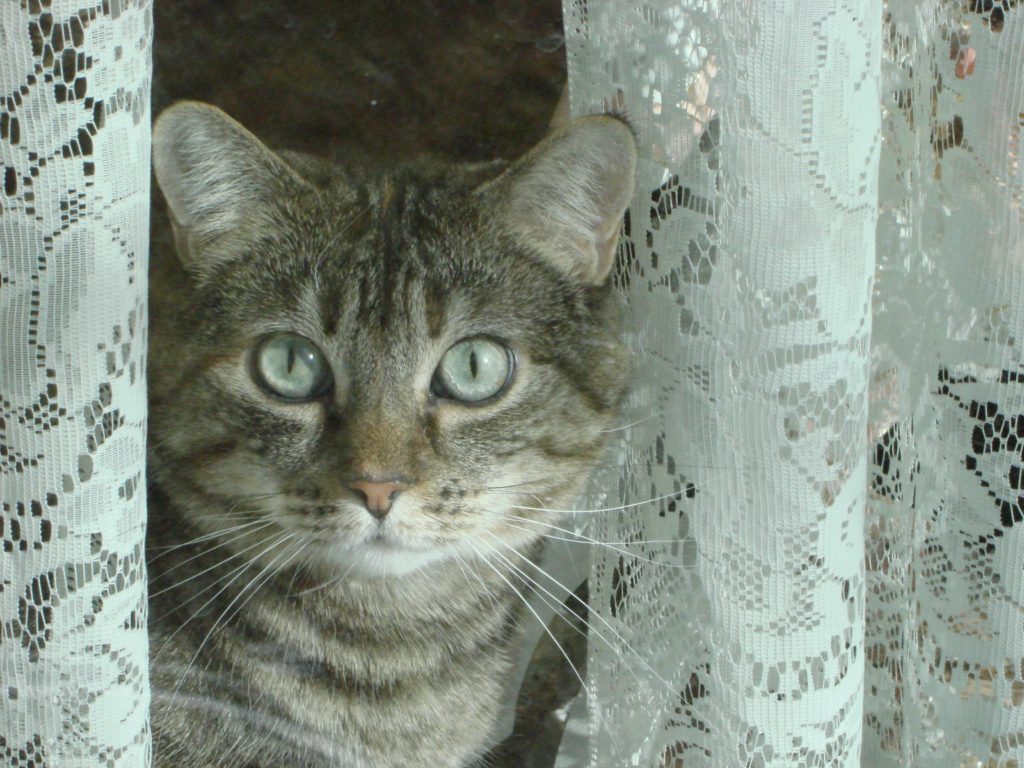 Cheery play-barks at the chain link fence gate brought me out of my pre-breakfast funk. I padded across the chilled floor in my slippers, opened the back door and called my two dogs in. I shivered in the winter’s chill; my robe did not cut the biting air. Normally obedient, the dogs insisted that I come to them, in that excited, come see! way dogs so clearly communicate.

I stepped out into the light snow that had fallen overnight and although the sun was up, it was low in the sky, without much warmth. I joined Jessie and Bailey at the gate and peered into the front yard. Not seeing anything, I followed their gaze to the clematis vines that tangled around the garage wall. Still nothing obvious. I opened the gate, took two steps, and peered into the leafless but obscure vines. There, in one small gap, I saw brown, grey, and black cat fur. The whole cat was not visible, but it was indoor cat fur, not an outdoor feral cat coat. Shivering was plain, so I knew the cat was alive.

I retreated into the house and gathered canned cat food, a plate, and a small bowl of warm water. I placed the food and water near the base of the clematis the cat refused to come out of and ran back inside to change from sleeping clothes to warmer garb. When I returned, leaving unhappy dogs inside, I knelt down in the frosty grass and saw the food was gone and a great deal of water had been drunk.

I re-filled the plate of food and placed it near the cat again. She came forward and I saw a beautiful tortoise-shell-colored head. As she greedily gobbled the next offering, I slowly fingered the plate and pulled it, inch-by-inch, farther out of the shrubbery. The cat followed the food. When she finished eating, I stroked her head and she looked up, half conscious, but with enormous green eyes. Calmly, I scooped her up in my arms. I thought if she went ballistic, I would be safe because I had a thick down parka on. Instead of fear or a fight, the poor thing went limp as I gathered her to my chest. I cuddled her closer and brought her into the laundry room where I had placed a warm crate. Gently I slid her frozen body inside and secured the door.

Again, she remained silent and compliant as I carried her through the family room filled with my dogs and a friend’s, who was visiting. I carefully carried the cat upstairs to one of my cat rooms—a bedroom redesigned for cat fostering. I opened the crate door and she shyly and stiffly exited, found one of the thick, warm beds I had placed near the heat duct, and settled in.

For the next three days the stray remained silent. She slept, ate, drank, and slept more. It took her two days to pee, she was so dehydrated. I added a space heater and raised the room temperature to eighty degrees. Slowly, she began to recover from her hypothermia. On the first day I drove around the neighborhood and posted “found cat” signs, called the local newspapers, contacted local veterinarian offices and shelters. No one called for her.

On the fourth day the cat became affectionate and interactive. I opened the bedroom door and put up the screen door I used to socialize foster cats to the rest of my resident animal family. She showed no fear of the dogs and only mild interest in my own cats. On the fifth day she began to yeowl. For the next seven days and nights the stray kept us all awake with the most horrific vocalizations. I realized she was in heat. I stepped up my efforts to find her owners.

Instead of anyone claiming her, I noticed my signs were taken down on two of the streets I had put them up on. Someone must have dumped her and did not want their kids to know where she was (she later showed me how much she loved children–she must have been raised with some). An insensitive parent must have dumped her because of the incessant noise she made. When it was legally clear that no one wanted her, I had her spayed. She recovered perfectly and became a quiet, sweet-tempered companion. Eventually she fit in with all the other animals in my home and she exited the cat room as one of the family. I named her Lillie Langtry, after the Victorian era adventuress who became an internationally acclaimed actress.

Nine years later I cuddled with Lillie and my other cats on another winter morning. As I scratched bellies and ears, I felt four distinct lumps in Lillie’s tummy. Immediately, I made a vet appointment. Three days later she had a lumpectomy, biopsy, and tummy tuck—because the tumors were large enough that their removal left a great deal of loose skin. Lillie recovered beautifully but the biopsies showed she had Stage Four breast cancer.

I then turned to a veterinary oncologist who did her own diagnosis and announced that the cancer had metastasized to Lillie’s lymph system. She told me we had about three months left together. She explained that if Lillie had been spayed earlier than the eight-to-twelve month age she was when the dogs found her, chances were this would not have happened.

When people neglect to spay and neuter their dogs and cats, they leave those pets open to reproductive tract cancers. Pet birth control is important, of course. But more pets die of cancer than people and many of the most common cancers are of these organs that are removed in spays and neuters. Sex hormones are even more dangerous for pets than people because their lives are accelerated—they age and die decades before illnesses show up in their human companions.

I ended up with eleven more months with my girl. Our vet team and the oncologist were pleased that they had erred in the time-line, but still, there was no cure and no way out of the eventual prognosis. Lillie passed away peacefully in her bed in my bedroom a few days before Christmas. Lillie’s animal family were all around her when Dr. Erica let her escape her final pain. Her ashes now sit with all her other siblings’—those she knew, and those she did not—in my living room display case. We are all together–as it should be. I never wanted Lillie to be homeless again. I wanted to keep her safe, loved, and appreciated. Although I could not keep her safe, she is still loved and appreciated for the years she gave us—in her quiet, sweet way.

As a professional humane educator I tell Lillie’s story over and over to all age groups, to bring home the importance of spaying and neutering early. Pet population control is not the only reason to alter pets. Their literal lives may depend upon it.