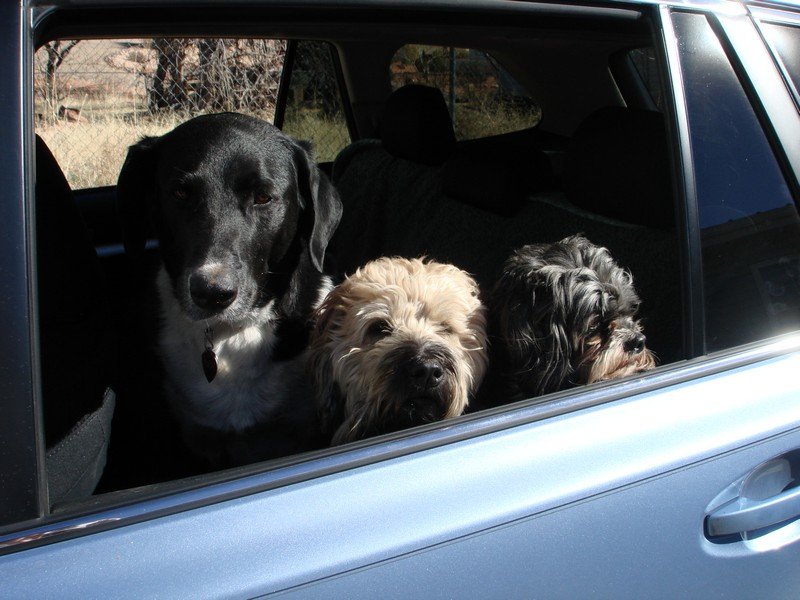 Eight weeks of limited movement--restrictions on stairs, substrates, and speed–put some pounds on my boy. But each day I could see the surgery had worked! Jessie’s walk was straight, he no longer needed the sling support, he raised both hind legs to urinate in ambidextrous flexibility. He even hopped his funny sideways invitation to play–back arched, head down, and mischievous look in his eyes. I could not allow him to be free off leash but we did increase our distances around the back yard. I wanted nothing more than to see him play with Bailey and Brillo again. But I knew I had to play the strict mother for a while longer.

Jessie continued to sleep often and while he remained in his pen in the family room, I added a full-spectrum light to his therapy. It was winter but the short days did not matter because Jessie spent most of his time indoors. I worried about his lack of real sun exposure because we always walked an hour every day. Two months with no prolonged outside exposure to sunlight might have depressed him, lowered his Vitamin D levels and therefore compromised the healing of his vertebrae. So I placed a Verilux “Happy Light” next to his bed in increasingly longer times each day.

One morning, I opened the dog door to allow Bailey and Brillo access to the snowy yard, while I fixed breakfast. Jessie lay on his orthopedic bed (which he decided he liked), as the cats wandered around us. Suddenly the always annoying dog next door slammed into our privacy fence, roaring its aggressive challenge to Bailey as she wandered the fence-line. She responded with her own barks. Jessie heard the commotion and before I could stop him, in an adrenaline rush, he pushed aside the pen fence, ran out the dog door and jumped onto the raised bed garden to protect his sister!

I raced out in my pajamas and robe, my slippers slipping in the snow, and got the noose leash around Jessie’s neck. I lead him to a low step out of the garden, with the neighbor dog staccato barking at us all the way back inside. I got Jessie calmed on his bed and prayed that he had not torn interior stitches. The dog door remained blocked for the rest of Jessie’s recovery, to the chagrin of Bailey and Brillo. So everyone’s freedom was curtailed for the time being. 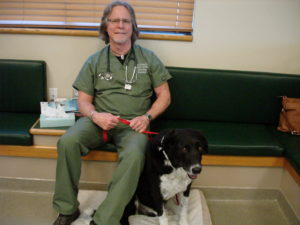 The wonderful Dr. Curtis Probst, with Jessie at our final post-op check.

Jessie’s first trip back to Dr. Probst was positive and he was then allowed to be freed of the pen, although no stairs were allowed. We walked a little farther each day and finally took short turns in the field just outside our yard. With Dr. P’s okay, we began to increase our on-leash walks to three houses away, then six, then around the block. I took Jessie, Bailey and Brillo together on short jaunts. When Jessie’s limit was hit, he was locked in the house and I continued our longer walks with Bailey and Brillo.Jessie hated being left behind but I devised ways to vary our departures so he often thought we were just in other areas of the house.

I exited and entered different doors, put the other dogs in the garage or the front entry, then circled around and got them; all quietly done so Jessie would not (hopefully) be aware that we were leaving him. His increasing age-related hearing loss assisted me, and often I turned on the clothes washer and/or dryer in the room next to him so he would not hear doors opening and closing.

Gradually, Jessie’s ability to walk for longer periods increased and I shortened our family walks to his abilities. I allowed him to set our speed and let crazy little Brillo off-leash so he could run around us. Eventually I realized I was a burden to Jessie, always a weight at the end of his leash. When Dr. P gave us our final check and announced no more restrictions were necessary, I knew Jessie would love getting rid of me.

The morning after our final post-op check, I opened our back gate and let all three dogs run free in the field. Jessie’s joy was a beautiful sight. He didn’t run far, but he ran! He bounced, twisted,even jumped in his exuberance. We now go to the reservoir and walk in the sand and water for therapy, go to his laser treatments, and have begun acupuncture. His fur has almost grown in over his incision, his tail waves high, and it is obvious he is free of that creeping chronic pain.

The bills are finally paid off, Jessie is fixed, and our lives are back to normal. Five months from disability to cure! Lessons were learned, hardships endured, and time spent during this journey have all proved fruitful and worth every effort. My twelve-year-old companion is at my side, out of pain, engaged with life, and interactive with his family. We are free to roam, lay peacefully in the evenings, and travel in the car to new adventures. I am thankful for my new veterinary friends, appreciative of the technologies that cured my pet, and never, ever take a day with Jessie for granted. 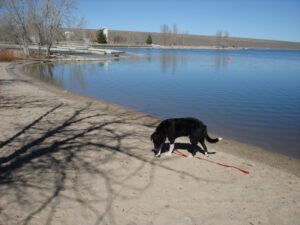