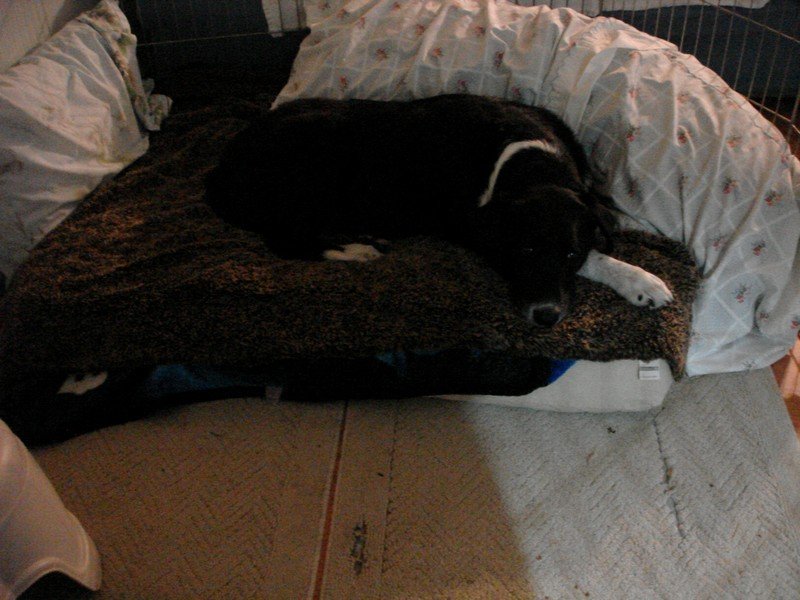 Day One: I became a “helicopter parent” on Jessie’s first day home. Although he mostly slept, I hovered, hoping to answer his every need. I had taken the day off work, even though I work out of my house. I did not want any distraction for myself or noise for him. I turned off my cell phone, turned down the volume on my antiquated answering machine, and unplugged the even more antiquated sky blue Princess land-line phone.

Despite my efforts, Jessie had no interest in eating or drinking. When it was time to give him medicines I crushed the pills between two teaspoons into a fine powder. I made a slurry of stinky canned cat food, water, and the pill powder. I warmed the mixture in the microwave until the cat food reeked, then spooned the mud-like mixture into Jessie’s mouth. Because dogs eat for smell, and not taste, the bowl of cat food near his nose motivated him to at least swallow. I fed him until he turned his head away. He would not lift his head from the floor, just moved his nose out of reach. I did not force him.

Throughout the day and into the evening I also checked his gums for dehydration. I offered his water bowl but he did not lift his head for that either. I had to keep him hydrated. According to the last test at the hospital Jessie’s kidney function was good, and I wanted to keep it that way. Yet I also feared aspiration if I forced too much water into his mouth at once by pouring from a cup. I dug around the kitchen, hoping something would formulate into a plan. In the back of my utensil drawer was a rarely used turkey baster. Perfect!

I filled a small bowl of lukewarm water and sat next to Jessie. He opened his eyes but did not raise his cheek from the rug. The white tip of his tail made an almost imperceptible tweak in welcome. He seemed to say, “Mommy, I don’t feel so good.” I stroked him and promised him everything would get better. I was also sure that the chronic pain he had been in for so long was already gone. Now we just had to get through the surgical healing.

Jessie had preferred the non-slide rugs on the floor of his enclosure to his six-inch thick orthopedic bed. It appeared that he was unable or unwilling to lift his feet high enough to get on the bed. So I let him lay where he chose and was grateful he was not confined in a crate, where he could not choose his resting place.

I placed a towel under his head then sucked up water from the bowl into the turkey baster. I gently placed the funnel end between his teeth, gums, and outside lip. Slowly I squeezed the bulb on the baster and let a tiny stream of water gurgle into Jessie’s tongue. I stopped until he swallowed. I did not want him to panic or inhale the water. Once the small dribbles were swallowed, I gave him time to breathe then repeated with another squeeze of the bulb.

The turkey baster held enough water to not have to repeatedly remove and replace the tube so once he felt comfortable with the amount of fluid entering between his teeth, he readily swallowed and waited for more. I did this several times each hour.  Jessie had urinated on his bed in the hospital as they readied him to get up and come out to me, so I knew it would be several hours of the small amounts of water he was ingesting before he’d have to urinate again.

I wasn’t sure how we would get outside or if he would just lose control where he lay, but I decided we would cross that bridge when we came to it. I had lined the interior of his pen, both the rugs and the bed, with absorbent cloth water-proof pee pads (once again, from my incontinent Aussie Miles during his last days), so it didn’t matter to me if Jessie had “accidents.” Our surgeon, Dr. Curtis Probst, had forewarned me so I was prepared. 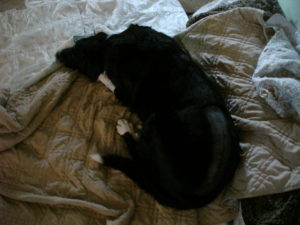 At 11:00 pm I mixed up shredded turkey, water, and rice. Jessie rose a bit and ate a little. He made an effort to get up, a sign that he had to relieve himself. His front half rose, but his hindquarters remained on the floor. I leashed Jessie to guide him. Dr. P had given me a padded sling so I helped Jessie get to his feet by supporting his belly (another thing that would have been impossible if he was in a crate) and we went outside. The outside ramps worked well and I had already shoveled a path for him through the snow.

Jessie urinated while squatting; he did not attempt to lift his hind leg. He had no bowel movement, but since he’d had diarrhea at the hospital (for which they had given him meds), I was not worried.

Inside again, I let Jessie again collapsed on the rugs and pee pads on the floor on his pen. I slept on the couch next to his enclosure until 1:30 am then went upstairs. I came back down at 5:45 am and gave Jessie more water. I tried food but without much luck. I did manage to get his meds down him with the cat food slurry.

As I prepared my own breakfast of eggs, fruit, and juice, I had an epiphany. Jessie’s favorite treat of all was cheese. He also liked eggs. So I made scrambled eggs and cheese (with no spices) for him. He gobbled the mixture down! From then on, I could put his meds in cheese, cook more eggs, and we had no problems with eating. I figured we needed to get through the first days and then, when Jessie returned to his normal eating patterns, I would return his choices to his renal diet. 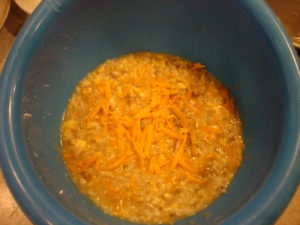 Day Two: Jessie drank out of his water bowl when I offered it on the second day. He would not get up and go to the bowl, but he would drink if I brought it to him. I called our general practitioner veterinarian, Dr. Rand Winton, and asked about hydration for Jessie to keep his kidneys clear. She agreed it was a good idea so I obtained the necessary supplies and began subcutaneous fluids once a day. I had experience from my fostering and medical work at the shelter. Jessie had always been a compliant patient as well, so hydration was a good intermediate solution until Jessie drank on his own consistently.

The afternoon of his second day home, I added shredded turkey to the egg and cheese mixture, and in the evening threw in some rice. Jessie ate this concoction for the next several days and grew stronger and stronger.

Day Three: The drugged haze began to lift and by the third day, he no longer needed the sling to get up. I continued to use the sling, as per Dr. P’s instructions because it was January and an icy slip could have ruined all our hard work. Jessie began lifting his leg to urinate and then even made attempts at what I call, “that boy thing”—scratching the ground with all four legs!

Jessie had his first bowel movement—another sign that things were beginning to work again. It was diarrhea but Dr. P had told me that would be due to the antibiotics he was on. Jessie had spiked a small fever his last night in the hospital and they suspected a possible urinary tract infection (UTI) due to the catheter.

Day Four: Jessie was outside, walking to his favorite poop spot with me trailing, holding the leash and the sling straps. He stopped walking, turned his head towards his rear end, lifted his right hind leg—and scratched his right ear, while standing on three legs! I was thrilled at his speedy recovery but knew as he began to feel better, my control of his behavior would become more necessary—if not more frustrating for him.

Day Five: The UTI test returned negative! Jessie also showed how bored he was inside his pen by pushing aside the fifteen and ten pound weights I had tied to the X-pen base. I had crept upstairs to brush my teeth and apply make-up for the day. I felt eyes on me and turned to see Jessie, with a big grin as though saying, “Hiya, whatcha doin?” Somehow he had gotten up the stairs to my second-story bedroom and stood, as proud as punch. After my heart attack (stairs were a no-no), I slowly escorted him back down the stairs and secured his pen—with him in it!

Next: Onwards and upwards in recovery!