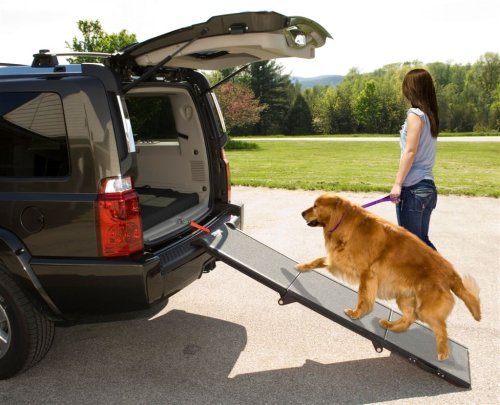 By autumn of 2016 Jessie my Lab mix dog, was unable to jump into the back seat of my Subaru Outback. We had abandoned his jumping into the cargo area long ago because it was too difficult for him. I felt he was safer in the back seat anyway, especially if someone rear-ended us. In the back seat Jessie would be supported by the rear of the seat and the front seat backs. If I was hit from the front or the back, he would be in the center of the passenger cage. If I had to slam on the brakes, he would not be able to fly too far without constraint.

Jessie was able to jump into the back seat at first because it was far lower than the cargo floor/bumper area. But then I noticed he would not jump in the seat unless the door was wide open. He seemed uncomfortable jumping from a sideways angle. This was necessary if the vehicle was in the garage where there was a center pole that prevented the rear door from opening all the way. I compromised and pulled the car into the driveway before loading Jessie. That way I could open the door wide.

But by the fall, he could not even do that. I stopped taking him to one of our favorite walking areas, the Cherry Creek Reservoir. He loved the unique smells and although he was unsure in water and did not like slippery substrates like rocks along our pond in the field at home, he would wade into the reservoir lake. He enjoyed walking in the shallow water on the sandy bottom. Like a beach-combing Pac Man he sauntered ankle-deep, biting at the water before him.

I researched online for ramps that would allow him to again go for the car rides he loved. I settled on one that had many good reviews. It was extra wide—he is a large dog and his balance was not as good as when he was an athletic youngster. It appeared sturdy at the joints and the attachment to the back of an SUV cargo bumper. It unfolded into a long gradual incline. The three sections could be folded up, secured, and had a handle for easy lifting, carrying, and storage. The surface was cited as being non-skid and a sand-papery texture. Jessie, like most four-legged animals, hates unsure footing and slipperiness. I bought it sight unseen and hoped for the best.

The ramp arrived and was easy to figure out. When folded out, the three sections were sturdy, non-bouncy, and the base did not slide on the ground.  There was a clip that attached to the hatch door loop so it would not slip off the bumper. I brought it into the hallway between our family room and the stairs to the second story of our house, and laid it out flat. Jessie had to walk over it to get to bed each night and outside each morning. I began with it folded so only one section had to be stepped on. The next day I unfolded two sections. On the third day I laid out all three sections flat on the floor.

My goal was to habituate Jessie to walking over the ramp while it lay flat, without any fuss or formal training. Habituation in a natural setting worked with Jessie because I also walked over it, so as he followed me, he accepted the new “floor.” Within a short time, Jessie walked over the whole length to follow me around the house and to go upstairs to bed at night. Next I placed the ramp perpendicularly to the stairs so all four of his feet had to hit as he approached the stairway. I left it there for three days.

Then I lay the front of the ramp on the first step and blocked either side so he could not side-step around it. After two days, I moved the ramp up to the second step. Then the third step. When Jessie thought nothing of going up three stairs of incline, I decided to try the car.

Armed with stinky, slimy cheese in my “target” hand, I lined Jessie up in the driveway facing the ramp as it spread out from the cargo area of the vehicle. Gently holding his leash with about twelve inches of slack (for Jessie has always hated being controlled by a tight collar hold), I pointed my index finger to the ramp surface and let him smell the cheese in my hand. I put one piece of cheese on the ramp and he placed both front feet on it to reach the prize. Then I placed a second piece and he moved towards it. I  pointed to each place I wanted a paw and he obliged.

I underestimated him. Without ado, he walked right up the ramp and into the vehicle, turned, and seemed to say, “Quit foolin’ around, give me the cheese.” I jackpotted him with a bunch and praised his courage and genius. Then I reversed the target direction with my finger and he came right down to the ground. I jackpotted and praised. The up and down again. He knew the car meant we should be going somewhere fun so I secured him in, folded the ramp and put it in the backseat, and took Jessie to the reservoir. I wanted him to associate the ramp as a new freedom–the ability to get in the car again, and then to go have adventure. It worked.

Jessie has never feared the ramp and eagerly loads up every time I ask. Although we are back to riding in the cargo area (the ramp did not fit the door opening to the back seat), I knew after surgery he would have to have his smaller orthopedic bed to rest upon anyway. We both reveled in our renewed freedom to be able to go together to places only the car could take us. I continued to associate the ramp with car rides to fun places; when it came time to go to veterinarians, he was “fluent” in the use of the ramp.