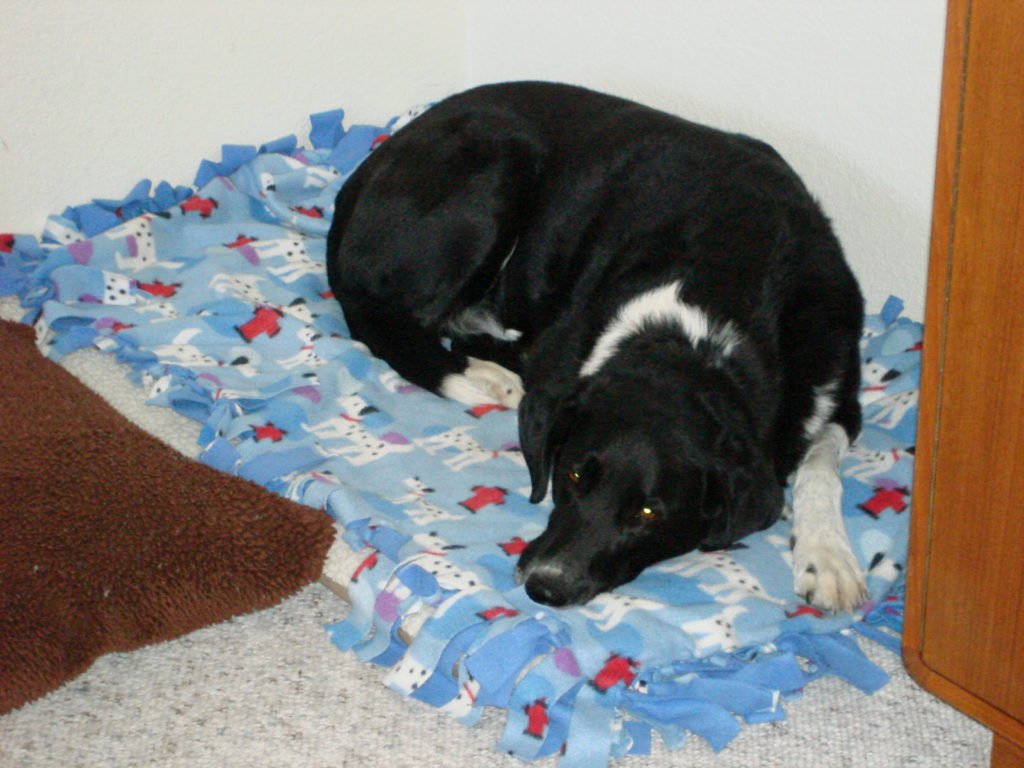 Dr. Curtis Probst of Parker Animal Emergency & Specialty Center, our veterinarian neurologist, examined Jessie in early December, 2016. He took my boy into another room to give him a detailed going over. I hate it when I am not allowed to see what the exam entails, and know why they are doing what they do. I want to be part of Jessie’s experience. I want to learn what he needs and how I can make his needs happen.

Veterinarians used to allow pet owners to decide on their own what they could or could not stomach. I always wanted to be a vet and am not naturally squeamish. Plus I want to learn everything I can about each of my pets’ situations. When I was young, women were not allowed into vet schools very often and it cost a fortune. Scholarships for women were few, and although it was (and is) almost impossible to work and go to graduate schools, jobs available to women when I was college-age were low-paying and menial. I managed to work my way through my B.A. but there my formal schooling had to stop.

After all my years in animal welfare, I am still curious and l also want to be an appropriate advocate for my pets in all areas, including their medical care. But these days few vets allow owners to be present when the patient receives care. I understand their position in some ways—owners can be annoying, rude, freaked out, or disinterested. But I am an animal professional and have immense respect for veterinarians’ skills and knowledge.

At the time of our meeting Dr. P, he was unaware of my work and writings. I gave him my card, website, and a copy of my book, Beyond Flight or Fight: A Compassionate Guide for Working with Fearful Dogs. Dr. P’s attitude toward me changed immediately. I felt he saw me more as a peer than as an average worried owner who was easily overwhelmed with too much information.

Still, Jessie was taken into a mysterious other room and examined neurologically. When Jessie and Dr. P returned, he told me he suspected a bulging disc in Jessie’s lower back. The doctor suggested four weeks of total rest—in a crate! I asked why “four weeks” and what else did “total rest” mean? No running. No stairs. No playing. No walking except on leash and only to go outside to relieve himself. I then asked what he expected after this four weeks of hell for my intelligent, active, big dog. “Either he will be better or he won’t be,” he replied.

“So if we take four weeks out of a twelve-year-old dog’s life and waste them on rest that may not fix him (which probably will not, as I researched), then what?”

“My suggestion would be an MRI (magnetic resonance imaging). Then we can confirm exactly what is going on and can have a good idea what surgery approach to expect to take.” He seemed to search my face for possible negative reaction.

“Four weeks in an older dog’s life is too valuable to be wasted if rest is not likely to work,” I replied. “How about if we rest for two weeks and if there is no change dive right into the MRI? I would like to get Jessie fixed ASAP. I don’t know how long he’s suffered already, he is so stoic. I want the rest of his life to be as high quality as I can help it be.”

Dr. P brightened. “That sounds like a good idea.” I got the distinct impression he was trying to be conservative—both because the average dog owner might not receive bad news realistically, and because MRIs are extremely expensive. Perhaps Dr. P feared a dog’s owner might feel his dog might not be worth the expense and would allow him to suffer. What I had learned of Dr. P’s background told me of his compassion. He had been a general practitioner vet for many years and then in middle age had returned to school for his specialty board certification, not an easy task.  Dr. P entered his profession to service pets in pain and correct abnormalities with his skill. To face an indifferent owner is the greatest trial of any well-meaning and empathetic veterinarian.

We agreed on our plan. I made the follow-up appointment and the appointment for the MRI I was sure would follow. It did. Two weeks of rest, although not crate-restricted because Jessie is crate-phobic (see Part One), Jessie showed no signs of improvement. The morning of the MRI I returned to Dr. P and dropped Jessie off for general anesthesia and the test. Surprisingly, he had contacted Jessie’s cardiologist for anesthesia protocols for his age-related bronchitis. I was pleased with Dr. P’s listening to me and his thoroughness. Dr. P called me later that day and told me Jessie was awake and ready to be picked up.

Dr. P’s reception was warm and before he had Jessie brought to me, he took me to the back area of the hospital to the MRI reading board. There he spent a half an hour going over every single slide from multiple views in the MRI and explained each in detail.  He had imaged Jessie’s neck as well, because he suspected another pinched nerve, but found none. He related that Jessie’s neck stiffness could be basic aged arthritis. We moved the imaging down Jessie’s spine and he explained the normal and good criteria that we saw.

Then we arrived at Jessie’s lower back. There, plainly, was a bulging disc. Dr. P explained that the nerves and blood vessels feeding Jessie’s hind legs and tail were pinched in the compression caused by the bulging disc. His suggestion for a surgical approach was what he called a dorsal laminectomy.

Dr. P’s plan was to “take off the top of the S-1 vertebrae, allowing the compression of the nerves and vessels to lessen. Then we may remove or shave down the bulging disc. We will graft some of Jessie’s own body fat from under his skin (and therefore avoid tissue rejection) and place it as a cushion over the top of the vertebrae. We’ll suture his overlaying muscle to hold it all in place. The muscle in that area runs parallel to the spinal cord, so we will not have to cut it. We simply pull it aside and clamp it off as we work. Then we release the muscle so it lays back together over the area where we have worked. By suturing the muscle with dissolvable sutures, all will be held together during the recovery period. He will end up feeling much better after this surgery than he does now.”

He agreed there were less expensive treatments for Jessie’s symptoms, but that the surgery was the only true fix for the problems Jessie had. We were on the same page regarding a true solution, increased quality of life, and elimination of pain for my dear dog. I felt hope  that we might be able to forestall the implications of aging, giving me more time with a wonderful companion.

We scheduled surgery for January 3, 2017. January is a quiet month for all my businesses and writing commitments. Colorado weather is conducive to both Jessie and me staying indoors and not feeling we are missing good weather walks. I returned home feeling confident that our surgeon was a good choice, and that I would continue to research what Jessie would need during his confinement recovery time.