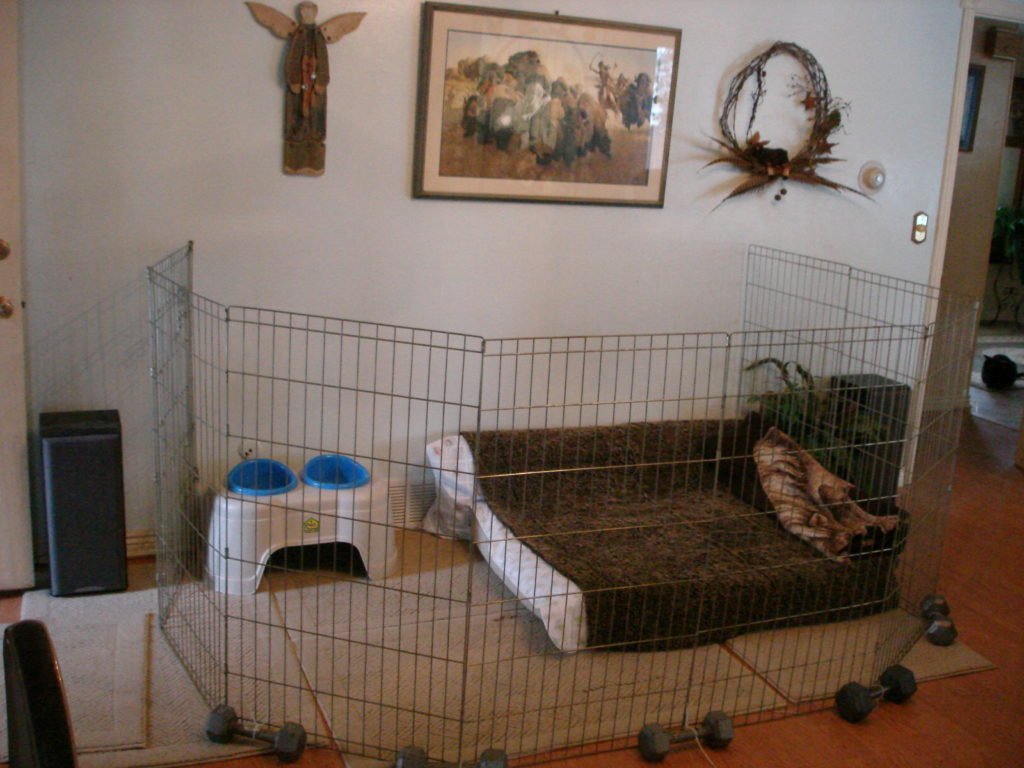 Preparation for Jessie’s surgery was an interesting experience. I surveyed my home, yard, on-hand equipment, and cleared my personal and work commitments as much as possible to devote myself to his care. Here are some of the ways I addressed the upcoming event and long recovery of my companion and friend~

After back surgery Jessie would need to be confined—most commonly to a crate. But his crate-phobia eliminated this. I devised a way to confine him but also to give him more room to change positions, move around a bit, and maintain his psychological peace of mind. Confinement for any animal can be depressing, and Jessie’s mental health was as important to me as his physical safety.

My work with dogs over many years made a wide variety of crates, fences, toys, harnesses, etc. necessary. I designed and had made various enclosures for neonate kittens, in-door fences for puppies, and assorted paraphernalia for my work with orthopedic and fearful dogs. I continued to hang on to all my tools. So I went through my stuff to find applicable gadgets for Jessie’s recovery.

I had an X-pen from my shelter fostering days, which would be perfect for constructing a small space for Jessie to recover in safely. I moved my family room couch from the wall that faced the fireplace. I unfolded the X-pen so that each end came up against the wall in a U-shape. X-pens are usually used in a circle, with one end of the fence attached to the other, and a built-in gate that allows access to the interior. But a circle would be too small for my large dog and the giant orthopedic bed was rectangular and would not fit in a circular fence.

The orthopedic bed was inherited from my deceased dog, Miles, who also had back surgery years ago. I covered the mattress in a waterproof yard trash bag because the doctor expected Jessie to be mildly incontinent after surgery.  I put on the mattress cover and then had a supply of clean blankets to put over the top. I also laid a long body pillow around the wall and fencing to cushion Jessie’s back and protect his incision staples.

If the x-pen was not attached to itself, it might fall over or be easily pushed away, so I came up with a way to secure it at its base. I attached my 15-, 12-, and 10-pound dumbbells to the base wire of the X-pen with plastic fence ties. Inside I lay three washable, plastic-backed throw rugs for traction on the laminate floor. I placed the orthopedic bed at one end and elevated food and water bowls at the other. All were placed upon the rugs so nothing, including Jessie’s paws, would slip.

I spent three weeks prior to surgery feeding and watering Jessie in raised bowls to habituate him to: a) new bowls that fit the holder, and b) elevation in his bowls. It would be more comfortable for him to eat and drink without stretching his neck and back following surgery.  I decided to get him used to new items and experiences well before his return home from the hospital (ditto the orthopedic bed, rugs, and car ramp). 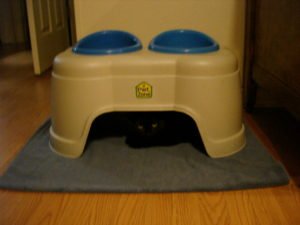 Doorway Ramps to the Yard

I had wooden ramps made to place over the two steps Jessie would have to descend from the back door to the yard. He would not be allowed to do any stairs for six to eight weeks post-surgery. I covered the ramps with outdoor synthetic grass carpet and textured rubber mats if it snowed or rained. Animals hate insecure substrates beneath their feet, plus I did not want Jessie to tear out sutures if he slipped and fell. I installed the ramps two weeks prior to his surgery.

We continued our daily hour-long walks, although I let Jessie determined the speed. If he chose to stop and sniff, or if he broke into an abandoned run in circles in our field, I let him determine what he could tolerate. I wanted his last weeks and days before the upcoming months of restrictions to be filled with freedom and joyful abandonment. Our walks were exclusively for him. I got my cardio workouts in other ways. I hoped keeping Jessie strong would aid in a faster recovery.

I combined on- and off-leash activity because although Jessie is reliable off-leash, he would have to be on-leash during recovery. I could not allow him a dash to the yard fence or to chase a teasing squirrel. I also reverse-habituated him from a 20-foot retractable leash to shorter length leashes. By surgery day he was once again accepting of a six-foot training leash, which would be our tie to each other for the next six to eight weeks.

I made conscientious efforts to control my own emotional/physical manifestations of worry as we approached surgery day. Jessie has always been extremely sensitive to my body language, tone of voice (an expletive following a stubbed toe can send him scurrying), and he seems to read my emotions before I know I have them. I wanted to remain upbeat and cheery, so he would be too.

Consequently, I combined normal praise, commands, and humming as we wandered our field and neighborhood each day. On his last day prior to surgery I took him in the car (one last positive reinforcement for the car ramp) to Cherry Creek Reservoir where we enjoyed an outing of cold wind, snow, and icy water along the shoreline. I had no way to know when we would next be able to enjoy our freedom together again, so I too, relished that special day.

As Jessie became accustomed to the physical changes in his world, I increased my research into post-surgical care.