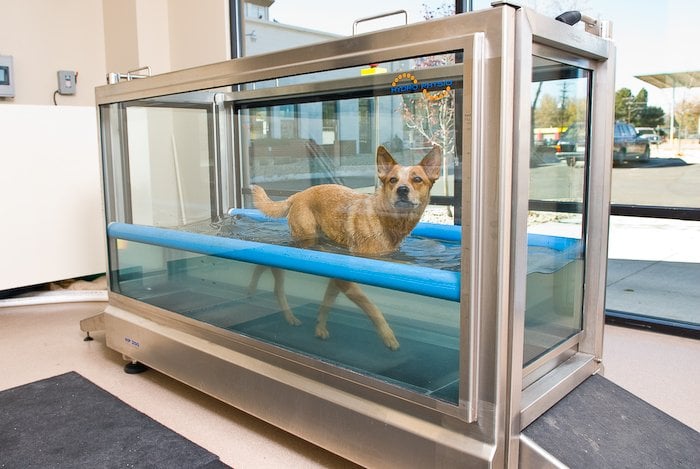 An upcoming field of animal welfare work is the area of physical therapy. Years ago my Australian Shepherd, Miles, had a back surgery which was similar to my current dog Jessie’s. Recovery was an at-home “wing it” affair and informal. I could always reach Miles’s medical staff for advice but there was not a specific place to go for actual recovery therapy.

Fifteen years later, Jessie was to have his back surgery. My personal experience with physical therapy following my own surgeries had sold me on the benefits of skilled guidance during the challenges of returning to normal activity. Prior to any surgery, all patients—human and animal– face decreasing mobility, chronic pain, fatigue, and mental depression. Following surgery, patients need advice on proceeding into increased activity while protecting the surgical site. I sought information from other dog lovers and was recommended a large physical therapy practice just for dogs.

Canine Conditioning and Rehabilitation Group (CCRG) has two locations in the Denver metro area. I choose the one closest to me, in Englewood. Jessie and I visited twice prior to his surgery so that I would feel better prepared to deal with his needs. On the day of our first consultation we entered a building amidst several warehouses. Inside, I was shocked at the amount of equipment and space that was devoted to every bit of professional attention any dog could need. 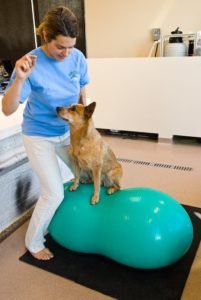 We met first with Caitlin Leonard, DVM. We were taken to an exam room where the bed I had brought was added to one that they provided. I never traveled with Jessie anymore without his portable orthopedic bed; he was no longer comfortable on bare floors. I never expected an orthopedic bed would be provided, but each exam room had one, covered with a clean towel for each dog.

Dr. Caitlin spent an hour with us evaluating Jessie, reviewing the information they obtained from our surgeon, asking questions about our home environment, and showing me massage and stretching techniques I could do at home once the surgeon cleared us. She also described the services they offered such as acupuncture, underwater treadmills, above ground swimming pool, and myriad exercise equipment. Chiropractic care was available as well as weight management, nutrition, and geriatric mobility conditioning. 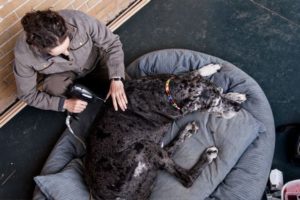 We also placed Jessie in the underwater treadmill tank and filled it to his ankles. He had always been claustrophobic, but the clear Plexiglas tank allowed him to see around and to see and hear me. Strangely, my Lab mix had always been afraid of deep water, so we started slowly, with shallow water and a slow treadmill. Although he was a bit stressed at first, when he exited and was surrounded by loving staff towel drying him, he loved the attention. 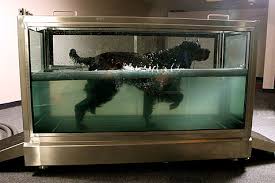 I left feeling quite encouraged about my ability to find my young Jessie again; or at least to return him to his previous activity level, before the bulging disc pinched his rear nerves and brought on aged limitations before his time.

Our second visit Jessie received a longer massage, a wider tour of the facility and another go in the underwater treadmill, with deeper water. My goal was to desensitize him to the feel of water around his legs and to make sure when we returned after surgery that he would already be familiar with the sights, sounds, and smells of the facility.

Dr. Caitlin emailed me detailed descriptions of massage and stretching techniques that were apropos to what Jessie would need and that I could start at home. We discussed the importance of Jessie’s surgeon’s release for such body work and subsequent physical therapy. The team approach was impressive and I, a concerned but ignorant pet parent, felt less alone and lost. I also felt I had a viable plan for assisting my beloved dog through his recovery. I had a purpose and now knowledge on how to help. I appreciated the inclusion of my own contribution to his health, and the confidence that I had professionals I could turn to.

We progressed toward surgery day knowing there was light at the end of the tunnel of digression. Each day Jessie suffered more pain and became closer to disability.  Thanks to skilled surgical and therapy teams, I knew his day of relief was coming. Soon the increasing chronic pain would be replaced with only surgical discomfort that would get better and better.

Next: A Second Opinion