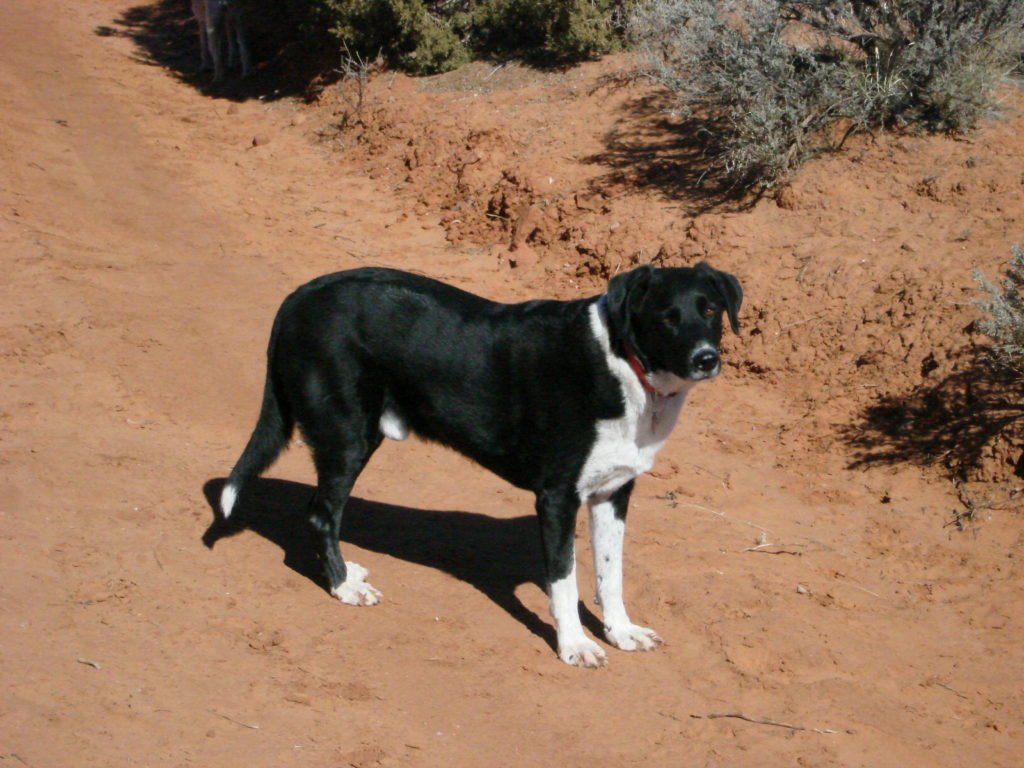 Jessie, my former foster Lab mix, began showing signs of lower back pain the summer of 2016. His tail carriage was lower than his usual gleeful high waves. I could always see Jessie in a field of tall grass because the back-and-forth white tip was always bobbing higher than the seed pods. Instead his wags paralleled his hocks. His rump seemed to curve down, as though he wanted to show constant submission. He began scraping his hind toenails occasionally on walks, and when we returned from our usual hour-long daily jaunt, he retreated to the family room sofa and went to sleep.

At first I attributed these symptoms as age-related. Jessie was somewhere between ten and twelve years old and he was a large dog. My first concern, however, became his increasing gag and cough. My regular veterinarian, Dr. Rand Winton of Parkside Animal Health Clinic in Aurora, CO, could find nothing wrong so in the spring of 2016 I took him to an internist, fearing a growth in his esophagus or along his windpipe. The internist diagnosed Jessie with age-related bronchitis and prescribed an oral bronchodilator.

I felt sad, because through the nine years I had Jessie in my life, he had been extremely healthy and physically fit. Now age seemed to be catching up and he and I were poised on the precipice of the mountain top of our life together. I could see the long downward slope stretching before us to that inevitable branching of our path. One side would lead to Jessie’s departure from this life and the other path would be mine to travel alone. I had been in this exact place looking down the same slope to the same forked road with other beloved dog companions.

Jessie’s negative reaction to the bronchodilator was a surprise and disappointment. At the same time he struggled with his beating heart, panting, and anxiety, the internist retired. I cut Jessie’s dosage in half and made a call to the Englewood Veterinary Referral Center of Colorado (VRCC) cardiology department I had long trusted with other dogs. I was overjoyed to find that Dr, Carroll Loyer, the founder of the department, had recently returned from a retirement that did not suit him. Jessie and I visited Dr. L and I immediately felt at home and relieved. Dr. L explained that Labs often react the same way Jessie had on that particular drug. He advised we cease using it. He also advised that we give Jessie the summer medication free and re-evaluate his bronchitis in the autumn. Then he would give me options of other meds that would be compatible with the unique Labrador physiology.

Fall, 2016 found us reunited with our cardiologist. Dr. L gave Jessie a thorough going-over, with x-rays, ultrasound, and a detailed physical. He said the bronchitis had not worsened and in fact, was fine without meds. “This will never kill him,” he said, to my infinite joy. “However, he does have a serious back problem and I think you should address that immediately.”

I explained that was next on my “to do” list for him, but I wanted to make sure Jessie’s cardiopulmonary issues were under control. Our cardiologist asked me where I planned to take him. I explained I had always gone to Dr. Glenn Rouse at Colorado Veterinary Specialists in Littleton, Co.  “Oh, Dr. R retired a few years ago,” Dr. L sympathized with my panic and suggested Dr. Curtis Probst at Animal Emergency & Specialty Center in Parker, Co. I immediately made an appointment for a consultation with Dr. P.

Our regular veterinarian, Dr. Winton highly praised the new neurologist, Dr. Probst. “I take my own dogs to him,” she said. I also consulted with my long-time friend and holistic veterinarian friend, Dr. Dave Swiekowski of Franktown Animal Clinic in Franktown, Co. “Dr. P is fantastic. Go there.” I felt confident I had found a competent neurologist/orthopedist for my sweet Jessie.

We met Dr. Probst in late November, 2016. He agreed there was something amiss in Jessie’s lower back and suggested four weeks of crate rest. This seemed to be the standard procedure but I had more questions, especially since Jessie is crate phobic, due to being locked in one in his youth, then left for an inordinately long time—with no prior habituation. Jessie had been a yard dog with a family pack. He’d never been in a house, a crate, or alone. One day his previous owner took all his dogs to a shelter and relinquished them. Jessie’s temperament was mild-mannered and affectionate so he was adopted his first weekend on the adoption floor.

His new adopter left for work that next Monday and put Jessie in a crate. During the long day alone in a new house with no one to comfort him, Jessie panicked. It took four hours for him to chew his way out of the crate, then he ran throughout the house and destroyed everything near any door to the outside. He was promptly returned to the shelter.

The shelter foster care department called me and asked me to do an in-home behavior evaluation, with the primary focus on Jessie’s “separation anxiety” because “we can’t test for house destruction in a shelter. Take him home and see if he destroys your house.” I pictured my European Baroque antique furniture in shards on the floor and hesitated. It was made clear that if I did not take him, he would be euthanized. That is when we met.

Instead of a one-year-old Lab, who I envisioned to be about forty pounds and knee-high, I faced a tall, skinny, hyper, drooling, bouncing ball of insecurity who would be able to knock me over with the right pull on a leash or well-placed front feet on a jump-up. I swallowed hard and took him home.

The next months I concentrated on trying to find what Jessie needed. It turned out that he never destroyed a thing in my house, because with the company of the rest of my menagerie, he was never alone. The shelter wanted me to crate train him but he was so paranoid by then that nothing I tried in incrementally habituating him to a large crate worked. I concluded that he would not need to be crated, and I would fight to find an adopter that understood that.

I worked on Jessie’s emotional insecurities and within a few months he learned to enjoy alone time and sought it out by going out the dog door to lay by himself in the sun. At night he often retreated to a room in the house to sleep alone, while the others joined me. He was ready to go to a new home. Potential adopters came to visit and as each one left, I felt strangely relieved. My goal was not to own any more dogs, but to foster and save as many lives as I could. But somehow Jessie seemed special. I ignored my instincts and concentrated on my duty.

Jessie’s second adoption was to a middle-aged couple who worked from their home. I advised the shelter that it was not a good match because they had no other pets, but the adopters assured everyone they would follow my behavior modification advice and not leave Jessie alone until he was well settled in. When he left, he looked back at me and I felt I had let him down somehow.

I advised the adopters to call me, not the shelter, if they had issues and for a few weeks they did. Then the calls died down. Then they stopped. I bit my lip and told myself the transition was complete and to move on to other dogs who needed my rehabilitation skills.

Six weeks later a friend at the shelter called. “Jessie’s back.” What? “They just relinquished him. They left him alone to go out to dinner and he destroyed their house. You’d better get over here before Department A talks to Department B—they’ll euth him.” I raced to the shelter and stole Jessie. Once he was again in my arms, it felt right.

Two weeks of conflict resulted. I had no foster contract; he was legally the shelter’s; they wanted him back to euthanize him. I fought and refused to bring him. I explained he did not deserve to die due to a series of human errors—mine included.  I should not have allowed him to leave. The shelter vice president finally told me, “If you want to save his life, adopt him. We won’t charge you the adoption fee.” So Jessie became mine and I became his.

Now, almost ten years later, Jessie needed me to save him again. Instead of facing death, he faced daily ongoing intense pain from bilateral pinched nerves, sciatica, and increasing dysfunction. Dr. P did an MRI on Jessie’s back and found a bulging disc in his lower back. I knew this would not get better with a month of complete rest. We set up a surgery date for a dorsal laminectomy.

Next: Preparing for Jessie’s Dorsal Laminectomy