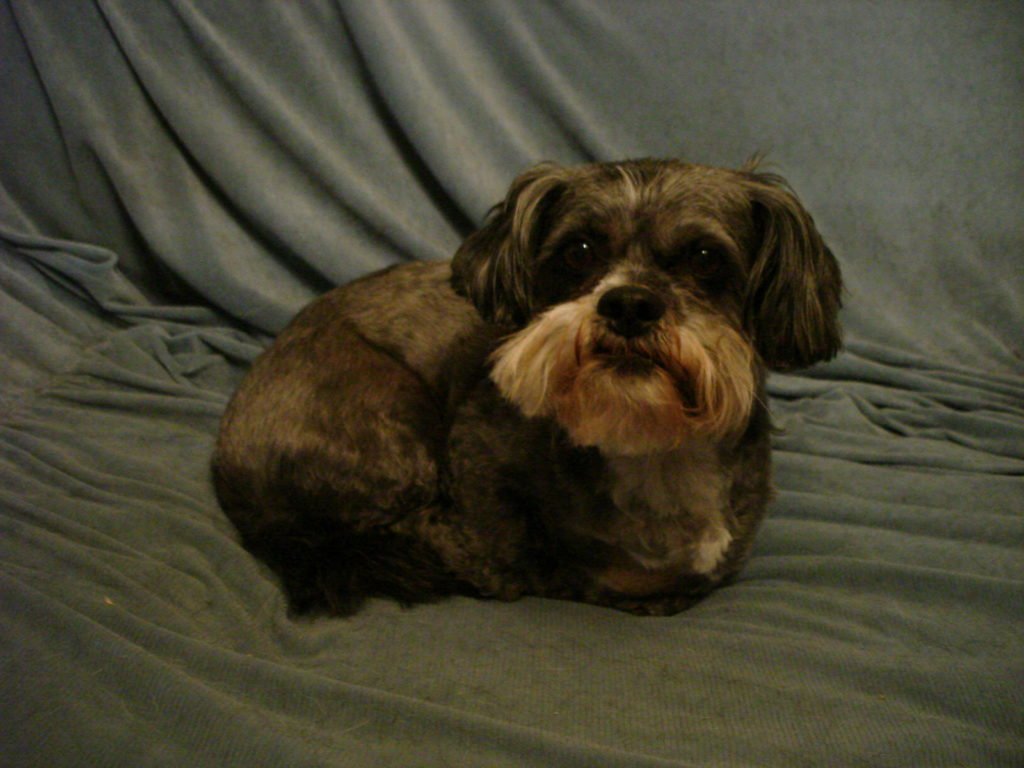 Shortly after fostering and then adopting Brillo, I found him scooting on his rear end across the floor, the grass in the yard, and even the wood chips in our garden. Fearing an obstruction, I rushed him into Parkside where our veterinary technician, Michelle, place him on the exam table and warned me to stand to the side. I was behind Brillo reassuring him, not knowing what was wrong.

“I see. . .” I started to say, but then I heard a fart and saw a black missile shoot across the room. It landed on the sunshiny yellow wall against which I had just been standing. Another missile shot and made contact an inch below the first one. Both began to ooze down the pretty wall. Then the reek of an indescribable odor hit my normally insensitive olfactory system. I gagged.

“Wow, he was really full,” Michelle commented casually. I stood with my mouth open. Had those disgusting projectiles really just exited my adorable little pup’s behind??? I was torn between embarrassment, uncontrollable laughter, and apologies about ruining the wall.

“Don’t worry,” laughed Michelle. “We paint with gloss so it will wipe right off.” The second tech scrubbed the wall as Michelle cleaned Brillo’s behind and sprayed a baby-powder scent on his nether-region. We shared a box of Kleenex and dabbed at our watering eyes—it was as though an invisible skunk had cut loose in the room.

Dr. Barrow examined Brillo too. “I’d like to try to get a needle biopsy if you can wait.” Of course I could. Everyone returned to the exam room with Brillo under Dr. Barrow’s arm. “I couldn’t get it—it’s the size of a BB and he’s too wiggly. Let’s watch this for a week. Come back and we’ll see if it’s gone or if it grows.”

Brillo and I returned. The BB growth remained. Dr. Barrow suggested a blood test to see if Brillo’s calcium level was heightened, which could mean a specific form of cancer. The next day Dr. Barrow called and told me, “Brillo’s calcium was normal and his test results were great. I suggest you take him to an oncologist and have the mass removed.”

The next morning I drove to Franktown and left my boy in the care of my friend, Dr. Dave. Dave explained the delicacy of the surgery but confirmed that he had done many of them in his umpteen years of practice. I trusted his skill and returned to my filled day of work.

Three hours later Dr. Dave called to inform me that he had successfully removed the mass, that Brillo was waking up well, but he had only taken the one gland because Brillo’s body temperature and fallen dangerously low during the surgery and they wanted to bring him out of the anesthesia as quickly as possible. Some dogs react to anesthesia with hypothermic body temperature drops, and no one can predict which will or won’t. “We have him on a heated water bed with hot water bottles all around him so he’s stabilizing,” Dave said. I had never heard of such things.

Dr. Dave released Brillo later in the afternoon. He explained the biopsy would take up to a week or ten days to receive results but he had gotten clean margins and the cancer cells appeared to be encapsulated, making spread unlikely. So now we wait.

Ten years ago little Brillo came to me as a foster to heal from a broken leg and a broken back. He had kennel cough, long ragged hair with knots tight against his skin. He was emaciated, frightened, but loving. It took three months before his hair grew out enough for me to cut all the mats out. He was eventually adopted by a remarkable young woman named Missy.

Missy had Cystic Fibrosis and he was the light of her life. Shortly after Brillo left me for her, she became ill, lapsed into a coma and Brillo returned to me but this time to board. Missy awakened to all the emails Brillo had “written” to her. She called me to thank me and I insisted she must get well because Brillo missed her.

Alas, she never got well, but instead passed away after fighting CF for 35 years. Her parents told me she wished I would keep Brillo so she wouldn’t have to worry about him. I did.  I will care for him as Missy would have, and as her courageous parents cared for her. Eventually he will rejoin her but hopefully not for a few more years. One more week and a biopsy test will tell what time we have left together. But when I must release him, I know there will be other loving arms awaiting him.