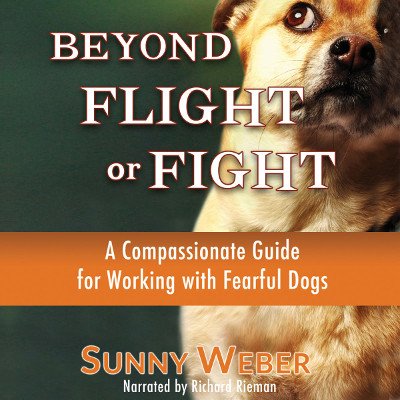 Dog lovers can now learn how to work with timid dogs whether they read or listen to Beyond Flight or Fight: A Compassionate Guide for Working with Fearful Dogs. Sight-challenged folks can glean the same knowledge as the fully-sighted; busy commuters can learn as they sit in traffic; dyslexic students can relax in the flow of smooth narration; busy bees can listen as they putter.

Download our audio-book or read our e-book or paperback. Information on your shy pup is now available in all contemporary forms of communication so you never have to wonder a second longer when your dog does something that perplexes you.

Understand the stand-offish dogs we have taken into our hearts and homes! Increased understanding and compassion will lead directly to more dog lives saved, because fearful dogs are the most often rejected, relinquished, and euthanized dog personality type.

Free Audio Book with a free trial from Audible.com. Click here for your free copy. 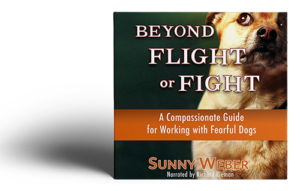 The History of Listening to Books~

“Mary had a little lamb, its fleece was white as snow. . .” In 1878 Thomas Edison recited this children’s verse into his newly invented phonograph, beginning the technology of spoken literature. In 1931 the American Foundation for the Blind and the United States Library of Congress began the Talking Books Program for returning World War I veterans who suffered vision injuries. The United States Congress voted to provide free postage delivery so all vets could have access to books.

Following World War II the newly formed GI Bill guaranteed college educations for veterans but those who returned with vision impairment could not read Braille and college textbooks were useless except when manually narrated by frequently unavailable human “readers.” Audio recordings were again expanded so this segment of the population could access information. The free Talking Books Program continues today for visually impaired citizens who qualify, particularly young vets and seniors.

In 1948 the “long-playing” (LP) record was invented for longer recordings and dominated the market through most of the 60s. Books were recorded in LP for schools, libraries, and veterans’ hospitals. The subject matter was mostly dramas, poetry, music, and a few mainstream books. In 1963 the audio-cassette was developed and gained popularity because it held even longer recordings, and being smaller, successfully competed with the LP. Then the invention of small cassette players like the Walkman made cassettes more user-friendly, especially for travel or outside activity.

In 1978, a traveling salesman who listened to motivational tapes while driving long distances, developed the idea of creating high quality unabridged recordings of classic literature read by professional actors. He formed a company that made mainstream novels more available for non-impaired but busy listeners, as well as those visibly challenged.

Major publishing houses stepped in with their own audio-book companies and more genres of book titles became available for listening. The most popular titles were “how to” but eventually other genres joined the market, reflecting an increasingly mobile audience as American society changed. Compact discs (CDs) became the next and longest playing tool for recorded books and music.

New technologies, lighter equipment, and more accessibility through snail mail, the internet, and libraries increased the popularity of recorded books. The transition from LP to cassette, to compact discs, gave way to digital downloads. Digital recordings allow buyers to access and immediately download everything—books, music, movies, and the now infamous Podcast. Advancements literally tumbled out of inventors’ minds and into listeners’ ears.

In 1997, Audible.com pioneered the world’s first mass-market digital media player, and it became the most popular listening device of its time. Audible.com was recently purchased by Amazon.com and is now a viable piece of their publishing empire which spans self-publishing book design, paperback printing, e-book and audio-book production, marketing, and distribution for all the books they list. Authors now have multiple methods for creating and marketing their work so the dependency on exclusive large publishing houses has shrunk. The publishing revolution continues to evolve.

In the last couple of years downloading books to listening devices such as tablets and smartphones is rapidly overtaking physical book purchases. As the huge market demographic of Baby Boomers age and experience visual and physical challenges, downloading audio-books instead of driving to bookstores and libraries, will continue to motivate the market into uncharted conveniences, as no other generation has.

Why Listen to a Book?

Today’s audio-book option has become an alternative to buying, holding, and carting around a physical book. Lighter-weight paperback books followed the traditional hard-cover versions as people became more transient and mobile. As technology advanced, down-loading e-book versions of reading material took over for many who found the ease of light-weight hand-held devices more practical, especially for travel. But the reader’s hands were still required to hold a physical device, thereby limiting other activities.

Tech companies that designed the hardware for hand-held computers such as laptops, tablets, and phones, competed for buyers with more and more applications that buyers could access and use during day-to-day activities. Now, the audio-book is a key way to access entertainment, information, and learning.

Listening to a book frees the “reader’s” hands and eyes to drive, do household chores, knit, exercise, or any other activity that can be done simultaneously while busying the ears and mind. People with vision disability such as blindness, macular degeneration, cataracts, or dyslexia are freer to seek entertainment, and no longer relegated to the television set or large, cumbersome machines that magnify print. This is especially important for the newly sight-challenged, who through injury or age, face loss of freedom in many spheres of life.

Audio-books allow children to read along as they listen, thereby associating the spoken words with the appearance of the written word. Audio-books are often used to assist reading learning and comprehension. Dyslexic, Attention Deficit Disorder, Autistic, and other learning disabilities can benefit from switching comprehension from confusing sight to clearer listening tools.

Downloading an entire book that can be listened to in short or long intervals of time, through headphones and ear buds without disturbing others around us, is the newest revolution in the technology of book publishing. As consumers find less time to “just sit down and read” multi-tasking abounds. Audio-books are becoming calming, informative, and  entertaining contrivances that fit into current lifestyles and “sound-bite” attention spans.

Audio-books serve an increasingly wider audience and as more books become available in this form of consumerism, “reading books” will see a resurgence of popularity, regardless of time limits in American lifestyles.

In 2017 the Age of Information has truly come of age!


GET YOUR AUDIO BOOK HERE