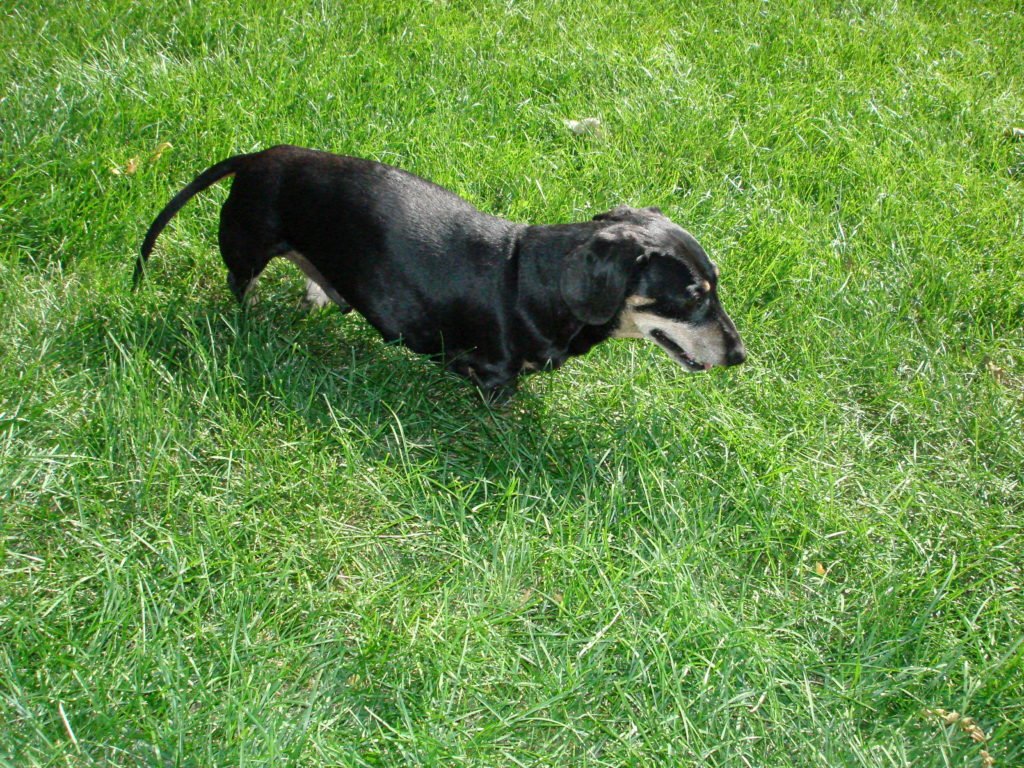 I recently dog-sat for an elderly Dachshund named Cody. He is one of those dogs that wheedles his way into one’s heart by just being around. Cody is fourteen years old and like most old Dachshunds, has back problems. He has intermittent use of his minuscule and crooked hind legs and is fed a myriad mixture of pain meds and holistic supplements by his devoted mistress.

Yet this determined, full-of-life little “ankle-biter” gives no ground to dogs ten times his size and is determined to investigate every novel corner of his environment. He muscles his way around with short but powerful front legs, sometimes hopping on, sometimes dragging, his hind legs. If he hops, his back legs land on rounded feet held close together; if he drags, one foot crosses the other and he wiggles to and fro, like a seal’s tail when out of water.

I became aware of Cody’s existence in a roundabout way. I had delivered yard signs for my state representative, Daniel Kagen. When he termed out of the House and ran for state Senate, I did the same. Even for the small amount I did to help the Kagen campaigns, I was generously rewarded by being invited to Daniel and Faye Kagen’s home for political events. They live in a large, beautiful house in one of our city’s exclusive areas, but Daniel and Faye remain the typical next-door-neighbor types—warm, humble, grateful, helpful, and well-intentioned towards all they welcome.

On my first visit to their home I waited as the yard signs were gathered and loaded into my vehicle. I glanced out the large back windows onto the Kagen patio and saw tiny ramps everywhere, connecting every change in steps. I recognized them as dog ramps and immediately decided that any politician who was so thoughtful of an unseen but obviously small dog, would represent me and all his constituents with the same compassion and devotion.

It was not until well after Daniel’s election to the state Senate that Cody and I met. Through my years as an animal behaviorist, trainer, author, and activist, I have made the acquaintance of many people in related fields. One person informed me of a newly formed group called, “Colorado Voters for Animals.”

I attended meetings at our state capitol building and found that Daniel’s wife Faye, is on the board of directors. I was pleased but not surprised that Daniel is one of Colorado’s most avid animal-friendly legislators. The week before the elections of 2016, and Daniel’s successful election to state Senate, the Kagens lost Cody’s companion dog. I left them a copy of my book, Beyond Flight or Fight: A Compassionate Guide for Working with Fearful Dogs, and a sympathy card when I left the victory party at their home.

I was surprised and pleased when Faye called me to pet sit. On our dog-to-dog meet-and-greet walk, I met Cody for the first time. He enthusiastically dragged and hopped his way around my yard, gregariously met my three dogs, and frequently accepted “check-ins” from his new companion, Poppy, a young Bichon. Although a puppy, Poppy submitted to Cody’s pint-sized leadership, and was careful not to knock into him.

I enjoy helping friends with their special needs dogs when they need pet sitting and Cody was just my kind of dog, elderly and crippled. I put up my own ramps for him, laid down carpets and rugs throughout my laminate-floored home, and was amazed at this little giant’s personality as he followed me everywhere. Poppy was comedic entertainment, but Cody became my buddy.

Cody personifies what we humans often do not have—acceptance of his limitations while not giving in to them. Throughout his stay with me he played, crawled, slid, hopped, dragged, and mouth-wrestled. He blatantly barked for affection, insisted on sitting with me in the recliner in the evenings, and contentedly cuddled with Poppy in their bed at night. He never complained, always ate well, took his meds, and guarded his treats with gusto. He also guarded my house and yard with a deep big-dog bark that surprised me with its authority.

Of all my roles as a dog caretaker—owner, foster mom, pet-sitter, behavior advisor, trainer—I find all dogs I meet are special, but there are those few who embed themselves in my heart deeper than I expect them to. Cody is one of those unique characters that any human could use as a life role model. He tolerates his age, impediments, limitations, and stature, just as he takes for granted his irresistibility. To him every dawn is a new adventure, every evening is the time for a solid snoring sleep. Why make life more complicated?

Cody lives in the moment and welcomes what occurs with curiosity, aplomb, and joy. His playfulness is plain, his attraction to delectable food is encouraging, and his overall joie de vivre is contagious. He sees no reason why everyone, dog or human, would not accept his cuteness. He suffers no rivalry, and lets every creature—dog, cat, squirrel, bird, or rabbit—know he is the boss of his world.

Cody’s spirit of courageousness in the face of larger dogs, his affectionate nature with all people, and his effervescent glow of aliveness, makes mortal humans take stock of their everyday complaints and realize we really have nothing to whine about.

Like his owners—Daniel, a son of Holocaust survivors, a foreigner who came to this country by choice, and who now chooses to serve our society with his immense intellectual and legislative talents, and Faye, a nurturing advocate for all animals and children—Cody gives in his own way by brightening each day with his happy-go-lucky pluck and determination.

I returned Cody to Faye upon her return and felt emotionally lighter, less pessimistic about my own issues, and enormously grateful that dogs like Cody and people like the Kagens grace our planet. There is hope in seeing the positive in small things: in small accomplishments, in small blessings, and especially in small dogs.