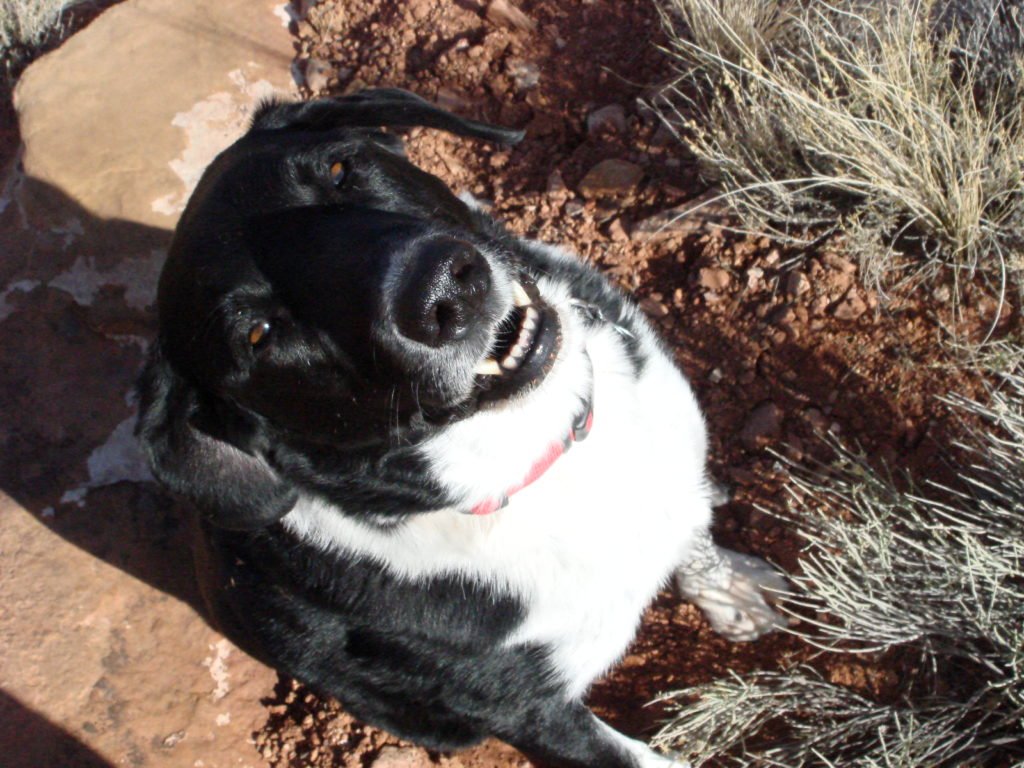 The day before Jessie’s surgery we drove to Cherry Creek State Park. I wanted to once again associate the car and the ramp with something positive. I also wanted to walk off some of the budding worry I found creeping into my mind. Jessie’s love of the trails, shallow water along the shoreline, and joy in novel olfactory stimuli (eg: Canadian goose poop) relaxed me a bit.

It was a freezing January day right after the New Year. Although the sun was out, much of the lake remained frozen and ice fishermen were crazy forms far out on the white sheet of motionless water. Close to shore, where the sun warmed the sand beneath the water, there was a narrow strip of frigid fluidity. Despite the wicked wind that cut through me, Jessie splashed along and stopped periodically to sniff a stray goose feather or fish carcass. He gamboled through the dry leaves on the narrow trails and happily lifted his leg on any vertical surface, marking just about every tree we passed.

At the start of our walk, he was his usual jovial, energetic self, trotting and bouncing around me with as much abandon as his retractable leash allowed. As time wore on he slowed and the pain in his back seemed to make a reappearance in his attitude. By the time he climbed his ramp back into the back of my vehicle, he was panting—from pain and fatigue. I was happy we had a great last day of freedom before the limitations of his surgical recovery. I also worried that this day might perhaps be our last day, period. If something unforeseen happened and he died, I would have a good memory of our truly last day. If he recovered but was maimed, he might never be able to run with abandon, or even walk on leash again.

I fought off my fears and focused on the fact that I was thankful that we had found his physical issue, that it was fixable, and that I could afford to fix him. It would be a struggle to pay the huge bill facing us, but I was confident that I had made my decision based on thorough research into every facet of possibility on how to help Jessie continue as pain-free and active a life as I could provide him.

The evening before surgery I fed Jessie a huge, special meal of canned food, mixed with chicken and the usual kibble. He would not be allowed to eat past midnight and I had no idea when he would feel like eating again. We spent the evening in our usual routines–I did not want him to sense anything unusual or pick up on my growing anxiety. He reads me as a speed reader would a thick book. I find his sensitivity a constant challenge to control my emotions before he picks up on anything that might confuse or alarm him.

I tucked him into bed, and said, “Tomorrow will be the start of a new life for you, Buddy. This is the last night you can sleep upstairs with me for a while. But soon everything will be back to normal and you will feel much better.” I hoped my reassurance would be true.

Early Tuesday morning, January 3, 2017, I loaded Jessie into my car. He eagerly climbed the ramp, perhaps looking forward to another jaunt at the Reservoir. Even when I pulled up at Parker Animal Emergency & Specialty Center he remained unafraid, for we had been there many times by then. We wandered nonchalantly around their grass potty area and went into the building. I felt as though I were the one about to go under the knife. As I sat waiting for Dr. P’s technician to come, my nervousness mounted. I took deep breaths in my attempt to appear calm to my alert dog.

I kissed Jessie’s head before I handed over his leash. He looked back at me when he was led away. I smiled and blew him a kiss. The surgery doors closed behind my boy and I went home to wait.

Around 3:00 that afternoon Dr. Probst called and told me Jessie was in recovery and waking up. The knot in my chest seemed to melt. “The surgery went well,” Dr. P said. “It was shorter than expected because when I got into the area I decided to leave the disc alone. It was not bulging badly enough to remove or shave down. With the top of the S-1 vertebrae removed, the pressure on the nerves and vessels is lessened and so I thought it best to avoid other possible complications with any further action. We have him on fluids to protect his kidneys and we’ll offer him some food this evening.” I thanked Dr. P profusely, hung up, and felt utterly drained.

I called later that evening and was told Jessie was on the narcotic Fentanyl for pain. They were also giving him an anti-anxiety medication which I requested due to his claustrophobia at being confined in a small hospital enclosure. He had eaten a small amount and was doing fine. I went to bed digesting what the future days and weeks would entail.