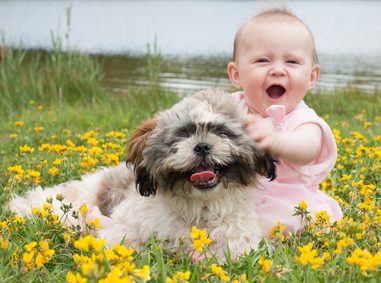 Two weeks ago a milestone was reached in the life of my rescued Wheaten Terrier, Bailey. Six years ago she was left at the shelter I volunteered at. The relinquishing note from her former owners cited that they “wanted to have a child” so they “must get rid of the dog.” Bailey became catatonic in the chaos of the shelter and was scheduled to be euthanized for extreme fear. A kind foster department staffer called me in a last ditch attempt to get her out and into a home to see if she could adjust to a normal life in. As a behaviorist, I was often asked to take dogs like Bailey by sympathetic employees. Their time in my home bought them weeks to adjust to the real world they’d inhabit IF I could help them become “adoptable.”

Once out of her kennel and into my car, Bailey came to life. She excitedly watched scenery as it sped fast; her relinquishment form also told us she “loved car rides.” Once at my house, Bailey didn’t want to leave the car but when she finally felt secure enough to exit and check out the back yard, she looked almost like a “normal” dog. I began my behavior evaluations and designed a positive reinforcement modification/habituation program, which included a lot of exercise. Bailey’s nerves settled when she was physically tired, which allowed thinking and learning to seep into her reactive brain.

It was quite by accident I discovered on a walk several weeks later that Bailey was deathly afraid of children. A group of various aged children charged us in the park, wanting to pet the fluffy dog that resembled a stuffed toy. When I couldn’t halt their aggressive and noisy approach, I stood in front of the cringing and then barking dog. Making myself as big and mean looking as I could I shouted at them to stop. No adult was in sight, yet I was sure if one of the children got bitten, an adult would instantly materialize with an attorney in tow.

Other episodes followed wherein Bailey lunged, barked, growled and air-snapped in every aggressive warning she could towards unheeding children and their parents. My job was to protect her and to protect them from their ignorance. In order to do both I found it necessary to circle around the playground in the park at slowing decreasing distances to habituate her to children’s fast movements and sounds. When she no longer needed to bypass the swing set in a mile-wide swath, we began going during busier and busier times where more children played. Eventually she walked right by the jungle-gym and never looked up, intent on sniffing out rabbits or following her idol, Jessie my big Lab mix.

My cooperative niece, now a mother of two toddlers, moved to town and brought her children to my house to visit. We both taught the children that when Bailey was in her “safe places”–on the stair or in the corner of the couch–they weren’t to touch her. If she was in the yard she chose to keep her distance and they weren’t to interact or throw things her way. They took to dog training like little behaviorists. One day my niece arrived carrying both children who had fallen asleep in their car seats and still slept in her arms. She brought them in one at a time and set them in my two recliners in the family room. Groggy and barely moving, they looked like life-sized bundled up dolls. Cautiously, Bailey approached, curious as most fearful animals can be. She sniffed them thoroughly and seemed puzzled about their lack of movement.

Slowly they began to stir. The incredible miracle of socialization to children took root. When they woke up and became active, Bailey seemed to have concluded they were just smaller versions of grown-up people, not alien life forms. Bailey no longer ran away when they arrived and was content to watch them play outdoors and then even indoors on the floor beneath her perch on the couch.

Two weeks ago another divine event occurred. My three-year-old great-niece wanted treats to entice one of my cats over for some pets. I gave her the bag and showed her how to drop the little nuggets on the kitty condo bed where Bug the black cat lay playfully flicking her tail. Distracted by the adorable scene before me, didn’t notice Bailey creep up behind us. My great-niece  did notice and before I could react, turned and held out her little hand. She instinctively held her palm up and flat and there in the center of her chubby plate lay some kitty kibble. Not wanting to alarm the dog, the cat, or the child I tensed silently, ready to spring if the dog went ballistic. Bailey gently licked the pieces out of the baby hand and. . .drum roll, please. . .WAGGED HER STUMP OF A TAIL!!!

There was no one to tell, no celebration to dance. This magical transformation in a dog that even I thought had reached the zenith of her improvement proved me wrong–that even after years of work, worry, observation, reinforcement, and caution, socialization growth was still possible. Hurray for Bailey, thanks to Bug, and when my great-niece gets married, I will regale the reception with a champagne toast and a retelling of this story. At three years of age, I can tell she’s going to be a wonderful mother!