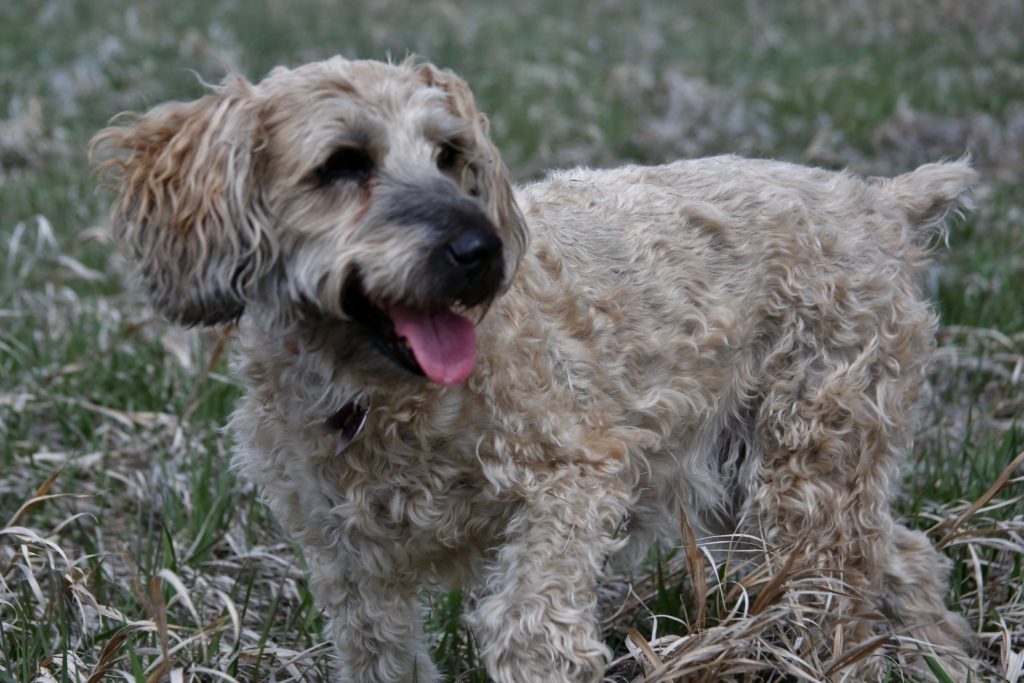 I almost made it to Bailey’s hills today.  I had hip revision surgery six weeks ago and each day I challenge myself to walk farther, with longer strides and more challenging inclines. Just a week ago I was dependent on a friend’s walking sticks to keep my balance. The week before that, I walked with a cane. I started four weeks ago on a walker. It is frustrating how quickly my body has weakened and how slowly strength is coming back. I want to go all the way to Bailey’s hills.

But I am walking without Bailey. She died two weeks after my surgery. Her life began almost fifteen years ago in a puppy mill.  It ended one cold winter night in front of my fireplace with her family surrounding her. She had not been to her hills in over a year because she could not walk that far anymore.

Badly bred, reactive, insecure, fearful, and anxious, Bailey’s life was a series of metaphorical hills and valleys, emotionally and physically. We came together when I took her out of the chaos of a shelter where she had been abandoned. Distraught, she become overwhelmed and lay motionless in a ball on the kennel floor. In my home and yard she became a dog again. A dog, but not a “normal” dog. She was a dog overflowing with anxiety and fear. A dog of dysfunctional cognitive abilities—a dog bred to be sold for her looks not her brain, temperament or physical soundness. She was a product to bring money to the people to whom she was nothing more than a non-sentient thing.

Bailey was a patchwork of bizarre behaviors—contradictory urges and in constant mental battles with herself. She was afraid of people but craved affection. She ran from human-made loud noises but would stand trance-like outside in a thunderstorm. Bailey was a flighty escape artist who once climbed a tree to get over the fence, and then panicked because she was alone. She needed to run but once away from what she knew, cowered in consternation. I called her my “little Attention Deficit Disorder dog.” Her attention span was unpredictable but if she found a smell that caught her nose, she obsessively focused on the spot indefinitely. She was all amygdala and no cerebral cortex. She was a bundle of primitive knee-jerk reactions, incapable of calm assessing and cool decision making.

I loved her. But sometimes I didn’t like her. I pitied her. But often she’d make me mad. I had a difficult time adjusting to her lack of intelligence, but then I’d melt in guilt under her trusting black-eyed gaze, realizing she couldn’t help her nature. She was easily confused and had to be re-exposed to questionable stimuli again and again until she finally remembered whatever it was, it wasn’t so scary. I helped her get control of her anxiety by exercise–lots and lots of walking and running.

Ironically, Bailey was fearless on the trail. Unlike most puppy mill survivors, no substrate frightened her. No matter how small or stinky, if there was a puddle or pond of water, she would be in it. When the city built a mountain bike course in the field behind our house, she relished running up and down the hills in her lopsided, left-lead way. Her gallop was choppy (a sign of coming arthritis?), and her left-pawedness made her hips sway unevenly. For years she remained a skinny, scrawny goof-ball, which was only accentuated by my poor clip job (she was afraid of all groomers), and her increasing black moles and lumpy fatty tumors.

There was a section of the bike trail that we walked and no matter what the approach or if I decided to go another direction, Bailey dodged away (she eventually became off-leash controlled with voice and hand signals) and headed for the path that rose and dipped five or six times on the constructed bumps for bikes. When she trotted over all of them she cantered back to my side, smiling and panting, satisfied in some dog way that the day’s walk was complete.

Then came the spring she refused to leave the yard. I held her leash out, which normally caused her to excitedly run to the back gate. Instead, she wagged her stumpy tail but stayed put. I went to the gate and call her, but she wouldn’t come. Her entire demeanor seemed to say, “I’d love to, Mom, but I just can’t. Please don’t be mad.” Honestly, her face was that easy to read. So I left with her dog roomies and let her stay home. When we returned, she ran up to us all—me first always—and greeted us with affectionate joy. She seemed relieved that we came back, and that no one was angry at her for not going.

True to my word to her when we first met, Bailey’s decline was one surrounded with love, absent of fear, and safe from anxiety. As her physical abilities waned, she meekly accepted her limitations and trusted me to help however I could. She willingly took the medicines for the increasing agony that crippled her. When she lost the ability to see, or hear, or even get up, I freed her from the dementia and pain. 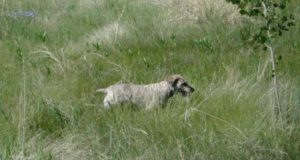 Now she is next to us when we walk again. She knows I still forget I don’t need to grab three treats from the jar—just two—but I sense her grin. She lies in her bed upstairs when we go up, for now the stairway is no obstacle. Bailey’s spirit quietly accompanies us all around the only home she knew, the yard she loved, and even on our walks in her field again. She is again the timid, unassuming companion we knew years ago. I can feel her, even if I can’t see her.

When I had unexpected and urgent surgery, she unobtrusively lay on the floor next to me, as she always did—at first physically, and then after her death, as a wispy breath of the ethereal. Always and forever my loyal girl.

Someday soon I will be able to walk far enough—to Bailey’s hills. Once again she will trot over them and rejoin me on the other side, panting, smiling, and free.

Read about Bailey’s life story in my book, Beyond Flight or Fight: A Compassionate Guide for Working with Fearful Dogs    Available on Amazon.com 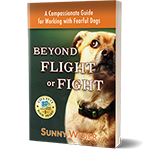