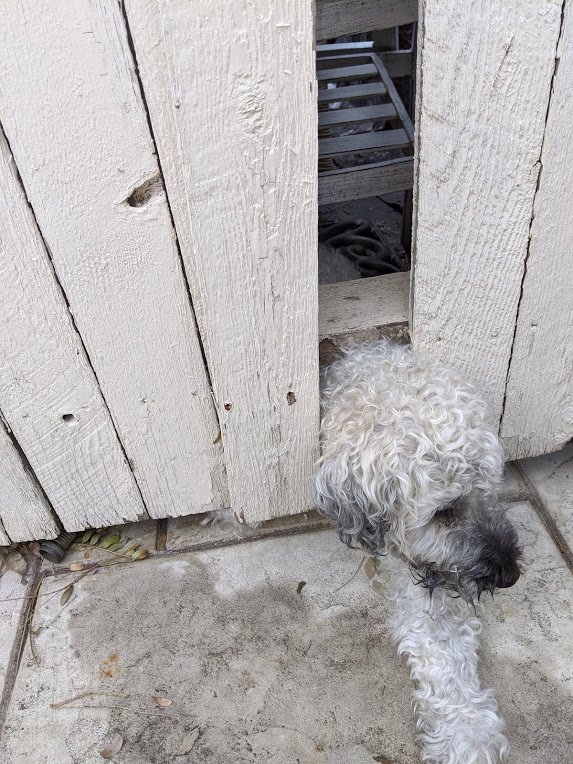 My fourteen-year-old Wheaten Terrier, Bailey, disappeared. Vanished. Melted into thin air. Somewhere in my own house. The panic that gurgled in the back of my brain wrestled with the logic that I knew she had fallen asleep on my bedroom floor last night. She was still there at 3:30 am when I roused for a bit.

But when I got up at 8:00 am (an hour later than usual, but it was Sunday), she was gone from the bedroom. She often rose before the rest of my pets and wandered downstairs and outside to relieve herself. Then she’d come in and fall back asleep in her family room bed.

In recent months Bailey’s cognitive functioning has slowed and changed. She’d never been the brightest bulb in my box of misfit pets, but she was family and so we all accepted her limitations. She knew when she had to get outside and so I left the dog door open for her, knowing she would come back in, regardless of weather.

This winter started early and hard. Wind, snow, below-normal temperatures, and ice on the dog pathways from the dog door, down the ramps, and into the yard. I feared Bailey would fall alone outside, as she became physically weaker. I blocked off the dog-sized opening in the fence gate that surrounded a small enclosure at the back door. Inside sat my hot tub, stored plant pots, patio furniture, the grill, and all were covered by large tarps clamped to the top of the fence—creating a makeshift garage. There remained enough room for Bailey to wander and pee and poop, then come back inside. For a while, she accepted the confined space.

This morning, as usual, I pattered downstairs in slippers and robe, to let my other dogs, Jessie and Brillo, outside. Although also elderly, they both retained the bladder and bowel control to make it completely through the night. Bailey was not asleep in the family room. I checked the hot tub area and did not see her. I searched all the inside dog areas on the main floor of the house. Then I searched the areas cordoned off  where my dogs and cats are not allowed (the living and dining rooms with antique furniture). No Bailey.

Thinking I had missed her curled up and sleeping upstairs, I searched all the rooms and even the closets—which I knew she could not be in. I searched under beds and chairs, although I knew she was too stiff to get under them. Fear scratched at my rational thinking.

Could a large eagle or hawk have carried her off from the hot tub area? How would one have gotten into the small enclosure? It would have had to been able to carry a 35-lb dog straight up, like a helicopter. Not likely. Could we have a rogue mountain lion? Not this far east on the plains. Where then, could a medium-sized old dog have disappeared to?

I threw all remaining logic aside and searched all corners in my outside yard. Nothing. The block on the gate from the enclosure to the yard was still up so she hadn’t pushed it aside and collapsed anywhere in the large yard. As I rounded the corner of the main patio to search the south side, a small, soiled white head with black eyes appeared on the concrete. Bailey’s head was stuck between two fence pickets. Her head was on the outside patio; her body remained crammed under piled patio chairs inside the enclosure.

For some bizarre reason, unknown to me and probably Bailey herself, she had squirmed through the tarp covered furniture and pots. In an attempt to get to the yard or to find a way out of the chair legs maze, she had pushed her head against the only lose board in the fence. Once out, her head became trapped as the picket dropped back into place.

I ran around through the house (for the gate remained locked) and out the back door. I ripped off the tarps, hauled furniture, and moved aside a heavy steel umbrella stand she lay upon. I pushed the picket to free Bailey’s head and then wrapped my hands under her wet belly. How long had she been like this? Did she have hypothermia?

Her body felt warm and she was not shivering. She must not have been stuck too long—it would have taken her time to stumble down the stairs, through the family room, out the dog door, down the ramps and to finish her peeing. Feces lay around her imprisoned position so she must have wanted to get to the grass, although she’d defecated in the enclosure many times before.

I lifted Bailey and turned her, whereupon she stiffly walked to the gate. I opened it for her and she limped into the yard. I went around through the house and she stood, waiting for me to open the sun room sliding glass door, as was her usual daytime custom. I let her in, washed her soiled legs and belly, put her coat on, and laid her in her orthopedic bed in front of the fireplace. I hand fed her half a can of her favorite food and let her fall into a safe, warm, peaceful sleep.

For thirteen years I have protected, cared for, and sought to provide a safe haven for Bailey. She came to me as a last hope before shelter euthanasia for extreme fear. After months of rehabilitation work, I realized Bailey would not fit in an average adopter’s  home and so I kept her. Through our lives together Bailey has conquered many fears but has remained a psychologically unique character. As she’s aged, her fears have declined as her dementia increased. I have accepted that we reached a peak of cognitive function years ago and now we are sliding down the back of the hill. Although she is losing ability to mentally function, I try to keep her physical well-being on as high a level as I can.

Although stuck in the fence, Bailey did not panic and hurt herself as she would have done when she first arrived. She trusted me to help her—another thing she would not have done back then. She let me tend to her comfort, and she realized she was inside her home and safe. That’s all I can expect now. I have pledged to her that I will do everything in my power to let her live out her days without fear, able to trust, comforted in love and warmth, with good food, medical care, and companionship.

I don’t know when the final moments of my time with Bailey will come, but I pray that they are with her in my arms, not lost or cold, or frightened—and especially not alone.