How do we as parents, teach our children to respect authority and yet think independently enough to decipher and reject illegal, immoral, or dangerous demands from those more powerful than they are—especially when we are not present to protect them? We want to protect our kids from harm, yet they may face adults or peers who use powerful deceits to manipulate our children into behaviors and situations that we would discourage if we were present.

Didactic lessons can be found through story-telling. Here is an excerpt from my book, From Wild to Mild: A Dog in Two Worlds, the third in the Pups & Purrs Children’s Humane Education Series (www.sunnyweber.com). The P&P Book Series consists of three stand-alone stories that feature dog characters who go through “coming of age” challenges that human middle-grade readers are often faced with. The dog, and other animal characters, illustrate through action and dialogue needed problem-solving. The logical analysis of options enables the animals to make decisions on how to face the dilemmas they are embroiled in.

In this segment, young Australian Shepherd Kaya is cruelly ordered by her coyote kidnapper/father to take actions she believes are wrong for her. Although she knows she should respect Maka as her father, she finds his manipulation, cruelty, and ego impossible to honor. Kaya also understands that her decisions will affect her adopted coyote family–Taina the mother, and her siblings Gopher and Flower. As she searches for her true self, as all children must do, Kaya experiences an epiphany of insight when she follows her heart’s path. 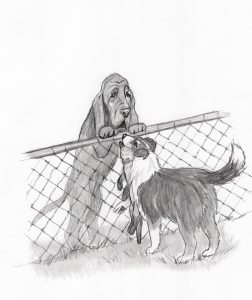 The moon shone in a cloudless sky one night as my family and I were trotting around a human neighborhood. Ahead, in a driveway, under a parked car, we saw a small, cream-colored creature, frozen in fear. Its eyes glowed green, then blinked, then glowed again in the dim reflection of the high street light. Fallen leaves blew in circles under the car, around the motionless form.

“Look, everybody—it’s a cat!” Gopher whispered. We stealthily fanned out into our usual hunting pattern. Maka was to the far right in the middle of the street, then Gopher, Flower, Taina, and me, nearest the curb. We formed a deadly semicircle as we closed in around the car. The cat remained, mute but watching. In the semidarkness, I could smell the cat’s fear. She looked well-fed and would make a decent meal for five coyotes.

Maka whispered hoarsely, “This kill is for Kaya. Do not fail!” He squinted his eyes and bared his teeth with warning. I knew he meant business. Although I resented Maka’s bossiness, my stomach churned with anxiety. Could I overcome my own conflicts and kill another living being? Did I dare infuriate Maka even more by refusing, or even worse, missing the kill? My mouth watered, not from hunger or anticipation of food, but from foreboding. What was I sensing? What was about to happen?

Inside the house a dog’s bark echoed. We heard the slap of a dog door, and then the dog was outside, barking frantically. The house was dark and looked as though no people were home. The dog ran up to the chain-link fence that bordered the driveway. He looked right, then left, his worried eyes following his sniffing nose. He finally spotted us, in our attack formation, slinking closer to the cat under the car. He was a long-eared, tall dog with loose skin, big jowls, and huge feet at the end of skinny legs. He jumped up on his hind legs with his front feet hanging over the top of the fence rail.

“Get out of here! Leave that cat alone! She’s mine—my best friend. Out! Out!” He jumped up and down on his hind legs with his front legs still on the top of the fence. It was easy to see he was too stiff to jump over.

“That old coot can’t do anything to stop you, Kaya,” hissed Maka. “Do not let me down. We’ll surround the car. You squeeze under and grab our dinner!” His black fur sparkled in the street light. If there had been no light, he would have been invisible except for those slanted, glowing eyes.

“What’s the dog saying, Mother?” asked Flower. She had never heard a dog before.

“It doesn’t matter,” Maka interrupted. “Kaya, get in there fast and get our meal!” My family encircled the car and stopped, ready to grab the cat if she shot out and away from my jaws. The old dog continued to howl, bark, and viciously warn us. I understood the dog’s desperate appeals. He and his cat loved each other. My heart opened in sympathy.

“She’s mine! My cat! Get away! If you harm her I will hunt you down. I am a bloodhound, and I can sniff you out anywhere you go. My man will come with his gun and kill all of you! She is old and cannot fight. Leave her alone.” The dog was beside himself as he looked at us, then at his friend under the car, and back to us again.

“Go!” growled Maka. I hesitated. What if I tried to kill but missed— how would he react? Or worse, what if I hurt the cat so she suffered? I would never forgive myself! What if one of the others got the cat instead of me? I did not want her to suffer from a bungled catch. How could I handle this situation?

In a flash, a plan came to me. I barked like a dog to the other dog. My family looked at me first with surprise, and then confusion, on their faces. I understood the dog’s pleas. Since I was the closest, I could answer him without my family hearing exactly what I said. As long as I sounded vicious, Maka might be fooled about my intent. I had never talked with a cat and did not know if she would understand my plan, but obviously this dog and cat could communicate with each other.

“Listen to me, dog!” I barked with fake fierceness to make Maka feel I was being genuinely aggressive. “You must be quiet and listen so my family cannot hear us. I will help you and your cat to safety, but you must explain to her my plan. Are you ready to hear me out?”

The dog quieted and whined, “Yes, yes. Tell me how to save her. I will do anything you say. Just do not betray us!”

I yipped back, “I will crawl under the car as if I am going to eat your cat. I will grab her neck where the loose skin is, like mothers carry puppies and kittens. She must go limp and appear dead. I will bring her out and show my coyote family that she is mine. I will prance around proudly and come to the fence to torment you with her ‘death.’ I will jump up on the fence to tease you with her body. Then I will drop her over to you, and you must both run into your house through your dog door and remain safe inside the rest of the night. Do you understand?”

“Yes—but how do I know you’ll do as you promise?”

“I was abducted by my father as a puppy. I am a dog, not a coyote. But you must communicate with your cat because we can’t make mistakes—my father is a ruthless killer.”

“Yes, I will explain to her,” replied the dog. He commenced to whine, yip, and squeal. The cat looked away from me and toward him. I had no idea if she would be a willing accomplice in my plan to betray my family. I hoped she would believe me and trust that I would save her life. My stomach churned. If she misunderstood and fought me with her claws, I would have to drop her and my family would fly at her. Maka would tear her to shreds. I stalked forward. I crawled on my belly under the car.

I quietly told the cat, “I am here to help. I hope that you will trust me. Roll over and let me grab your skin.” To my amazement, the cat did just as I asked. I gently but firmly pinched her fur in my front teeth and dragged her out. As I stood up, she went completely limp. She looked dead. I pranced over to the fence, as if to taunt the poor dog on the other side. I looked back at my family as the cat’s hind legs hung, like mine had when Maka carried me to our den that first night, over a year ago.

I saw shock on my mother’s and sibling’s faces. I saw Maka rise up from his stalking posture and look at me hard. Did he know what I was about to do? Was he amazed that I had finally killed? Was he disappointed that I was now a real coyote? Was he angry that he would now have to accept me?

In those moments under the street light, I realized my true nature was not to be a killer. My nature was to be a dog. I was no more a coyote than the bloodhound behind the fence. Empowered by this lightning-fast revelation, I feigned pride in my “kill” and teased the dog by jumping up on the fence. The dog howled in fake agony and distracted my family’s eyes for the split second it took me to lift the cat over the top bar of the fence and drop her on the other side. She sprang to life, and the two of them flew into their house.

“Oh, no!” I cried in mock shock. “I thought I had killed her. I did not know cats can ‘play dead’ like the mice! Did you?” My mother and siblings looked sympathetic, but Maka glowered.

“Again! Again you have failed! You are the most worthless creature I have ever known. You will never, ever be a true coyote. You are a failure!” Maka menacingly crept toward me, blind with fury. I braced myself for his pounce. I faced a confrontation with him confidently because I planned to beat the tar out of Maka. In fact, I almost broke out laughing—I had fooled him! I had succeeded in doing what I wanted. He did not control my cleverness. I bared my teeth in a wicked welcome of his coming attack. Next to me I felt, then saw, Flower, Gopher, and Taina slink to my side. Once again, we faced Maka as a team. My bitterness subsided when I realized I could place all my family in danger with my own foolish outburst. I tamped down my fury and joined my family as one unit.

Together we stood, a wall of raised fur, flashing teeth, and rumbling vocal threats. Maka stopped. With a final growl, he turned and left us. But I admitted Maka was right about one thing. I would never, ever, be a “true” coyote. I was a dog.

Instilling kindness, empathy, courage, and respect for all in our children will make them welcome members in society. It can be done through gentle persuasion, honest communication, and example. It can also be done vicariously, through stories with compelling, multi-level themes and benevolent messages. Reading with your child and then discussing those themes and messages can be not only a contribution to creating a wonderful little person, but also a deepening bond between you. Happy Reading!