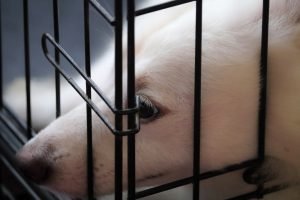 “The greatness of a nation and its moral progress can be judged by the way its animals are treated.”
– Mahatma Gandhi

Why is it so difficult to ban puppy mills in Colorado?

House Bill 1084 died February 22, 2020 in a 6-5 vote in the Colorado Legislature. Originally blocking pet stores from selling dogs and cats–which was amended out–it still required stores to use state-licensed breeders, limit the number of litters per dog, limit owned breeding stock to 25 or less, and sought to ensure producing animals were treated humanely.

Sponsored by Senator Monica Duran and Representative Mike Foote, Duran said, “I’m disappointed and heartbroken at what we had to give up.” She promised to continue to work to end puppy mills.

Senator Duran revised the 2021 version, with co-sponsor Rep. Matt Soper, and consumer protection was the primary focus. It would require pet stores to post the prices of the puppies and kittens, along with breeder information and the cost of financing dog purchases by buyers.

A second section of the bill drew the most business owner condemnation–while existing pet stores could still sell puppies and kittens, no new pet stores would be given licenses to do so. As originally written, the bill would have prohibited any new pet stores from selling dogs or cats that came from mills. But it also would have prohibited a current pet store from changing locations or selling, or passing the business to a family member, which was a real bone of contention and was eventually stripped from the bill. One of the key oppositional arguments was the bill was targeting “mom and pop” small businesses that were already suffering because of the Covid-19 pandemic.

The main opposing legislator said he would not be opposed if the bill focused only on the consumer protection language, and stripped out the bill’s “attack” on small business by the language that concerned animal welfare.

There are only nine pet stores in Colorado that are licensed and actively sell puppies and kittens. Pet store owners cited that the bill would increase the prices of pets and steer customers to unlicensed and out-of-state suppliers, decreasing both the quality and quantity of pets. They disagreed with the government’s restrictions on their “rights to earn a living.” Most of the pet stores claimed that puppy sales were their main income and that they could not compete with the big-box stores like Petsmart/Petco in just pet supplies and equipment.

No one testified about problems they personally experienced from buying a puppy or kitten from a Colorado pet store, although Amy Jesse, director of public policy for the Humane Society of the United States’ Stop Puppy Mills Campaign testified that she hears complaints from Colorado consumers on a regular basis. However, she did not know what specific stores the complaints came from.

In an article in Colorado Politics, reporter Marianne Goodland quoted Linda Hart, legislative director for the Colorado Federation of Dog Clubs and Breeders, who testified against the bill. Hart said, “The real problem is the proliferation of rescue organizations, some which have questionable backgrounds and documentation. Some bring in dogs that carry serious diseases.” She claimed, “The number of rescues have exploded to 270, compared to the nine pet stores targeted by the bill.”

Bill supporters hoped to protect animals in breeding operations by toughening state laws, including cutting off the high-volume breeding operations that supply pet stores. They also hoped that language in the bill would provide financial compensation for buyers who found themselves with new puppies sick with anti-biotic resistant illnesses. Many buyers pay hundreds to thousands of dollars for puppies and then are saddled with medical costs, plus the resulting emotional costs of worry and possible mourning if their new puppy dies. But this can happen with “rescue” dogs as well.

Colorado’s main legislation regarding the care of animals in facilities, is the Pet Animal Care & Facilities Act (PACFA). PACFA combines with the Federal Government’s Animal Welfare Act of 1966 (AWA).  The AWA was originally geared towards treatment of food animals, was insufficient even then, and is woefully outdated now. But it is still used as the only law that sets the standards of care for dogs in breeding facilities. It is considered the minimum acceptable standards. According to the AWA, dogs can be kept their entire lives in crates that are only inches larger than their bodies. Captive dogs can be denied social contact with other dogs, bred as many times as their bodies will take, and then killed when they can no longer produce. These standards leave a lot of room for dogs to be severely mistreated, and enforcement is questionable.

In England, breeders need a license to breed even a single dog – and only 5,000 were euthanized in 2015. The United States puts down two million dogs every year but imposes no limits on the number of dogs millers can breed. Enforcement has plummeted at USDA since 2017. Citations for violations are down more than 65% and the USDA has not revoked a single dog breeder license in at least three years. In lieu of formidable controls by US states and the federal government, more Colorado municipalities are taking actions on their own.

Both Berthoud and Breckenridge passed ordinances in 2019 that prevent pet stores from selling puppies and kittens. Rudy Taylor, founder of Harley’s Dream, and a major force behind the movement to ban puppy mills said, “We’re currently working on establishing ordinances in several other Colorado towns/cities as well. Some of the ordinances will be preemptive and some will not – most important, they will help pave the path for a statewide puppy mill bill which is being discussed for the near future.”

There were 238,000 claims of pet sales scams last year in the United States, with at least 50 in Colorado, according to Attorney General Phil Weiser. The American Kennel Club said last year that 80% of online puppy sales are scams.

Here are the answers I posed to Amy Jesse, Humane Society of the United States, Public Policy Director, Puppy Mills:

California and Maryland have already passed similar bans on pet store sales of puppies, kittens, and rabbits unless they are obtained from reputable shelters and rescues; thereby eliminating the demand for surplus and slipshod breeding. California’s 2019 bill is now law and bans the out-of-state importation and retail store sale of puppies, kittens, and rabbits. Maryland’s law was passed in 2018 and Governor Larry Hogan said, “Breeders are still allowed to breed dogs, the only different is now they have to comply with the law. The goal of the law isn’t to attack small businesses, but rather crack down on the abuse and neglect that happens in puppy mills.”

Orange County, Florida- The county commissioners are currently discussing the passage of one of two ordinances. One ordinance would require all current puppy-selling stores to stop partnering with puppy mills. The second ordinance would allow them to continue on with business as usual, but would stop new puppy-stores from opening.

– Require exercise for the dogs

– Require that they are fed twice per day

– And require protection from extreme temperatures.

–Will impose breeding limits per animal and ensure that breeders are making reasonable efforts to rehome retired dogs instead of discarding or killing them. Currently, none of this is required under the USDA.

How You Can Help–Join the Movement

Regardless of where you reside in Colorado there are activists groups growing that are waging the war against cruelty. Use the internet to find an organization you can contribute your energy to and see the Resources list below. Contact your law enforcement officials and insist they take action when abuses are uncovered. Hound (pardon the pun) your legislators to craft laws with teeth (sorry) that will take a bite (sorry again) out of abuse, neglect, cruelty, and abandonment of all animals. Remind all in positions of power that mistreatment of animals has always been documented as the first steps towards criminal activity towards people (called “The Link.”) Cruelty to animals leads to abuse of children which leads to violence against women. Become an advocate.