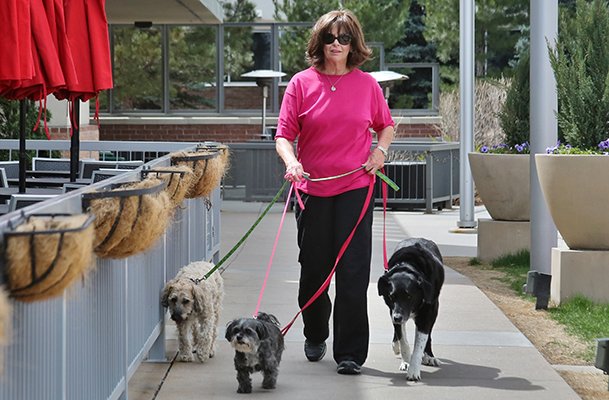 One cold winter day I was walking on a pedestrian trail in a neighborhood open space. My dogs and I were the only ones in the vicinity until a young boy rode past on a speeding bicycle. As he passed me within inches, he kicked out at one of my three dogs, who was directly in front of me.

He knocked her over with the force of his kick, and then he sped straight at my little dog, who was at the end of a twenty-five-foot retractable leash, sniffing. If this delinquent had hit my little guy (who had come to me as a medical foster for a broken back and hind leg), he could have killed him.

I immediately began to yell obscenities that would have burned the ears of a sailor. I carry small rocks with me, and I began throwing them. The kid swerved at the last second when a rock hit his back. Then he rode off without slowing down. I did not have my GoPro camera on that day since the weather was cold, and I thought I would be only one out.

I quickly called 911 and gave a description of the kid, his bike, his helmet and his clothes, as well as the direction of his escape—which was on a paved trail on flat ground and easy to see. The quick response by the dispatcher had a police officer waiting for the kid by the time he arrived at the far end of the trail at a street intersection. The kid was cited and his parents contacted.

Going a step farther, I posted the encounter on a multi neighborhood website, and several other people (dog walkers as well as other pedestrians) responded with similar stories of the same kid’s speed, aggressiveness, and dangerous rudeness. I turned all the emails over to the police, and they had an even stronger case to pursue.

Arrogantly, and oddly, the kid confronted me again a few days later—even though I had my GoPro on and was filming—as I was walking again in the open space behind our suburban home. He passed me, returned and accosted me. I ignored him—silence can be a wise response.

When his tirade brought no other action from me but a stony, sunglassed stare, he eventually rode off. Again, I turned the GoPro recording over to the police, which only added to the considerable file on his behavior and resulted in more legal action for his parents.

American society is disintegrating in urban and suburban populations. Rudeness, arrogance, aggression, and “me first” attitudes abound. Do not confront or respond to anyone exhibiting aggressive mental illness. You will not win. Protect yourself and your dog with pepper spray, cameras, and silence.

Report any and all offensive/aggressive behavior to your local law enforcement. Reports will be filed and utilized to establish behaviors that police can act upon. You can feel some satisfaction from being pro-active and find empowerment through action. You will, after all, be advocating for other innocent dogs and their people.