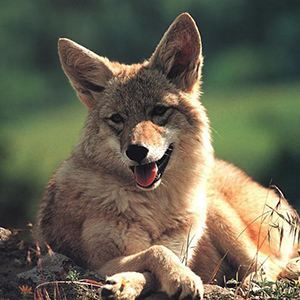 I recently attended a crowded city “educational” meeting that was offered to worried residents who may or may not have experienced “close encounters” with one of our most populous wildlife members–the coyote. A wildlife biologist friend of mine presented a “myth vs. fact” presentation and surprised many with the preponderance of superstitions that have been scientifically debunked regarding how coyotes act. We’ve found that such education can allay fears and with factual education, this 35-pound canid appears less like a scary, hairy gigantic monster with teeth.

Coyotes are “opportunistic” hunters, like skunks, raccoons, and foxes. They’ll eat almost anything and are called “omnivores.” Their favorite foods include critters humans consider nuisances or vermin, such as rats, mice, voles, rabbits, and snakes. They will quickly clean a neighborhood of these problem intruders, and yet people often want coyotes removed from the very areas they benefit. Unfortunately, coyote numbers are increasing, not decreasing because we provide very welcoming urban habitats.

Life-sustaining resources are abundant in our urban neighborhoods, hence the increasing presence of wildlife, not just coyotes. We must learn to live with them–but on human terms. If the presence of wildlife in your yard and neighborhood is not desired, the first steps are to remove welcoming resources. Don’t feed wildlife, especially the larger mammals mentioned above. Remove all dog and cat feeding stations from the outside (pets should be fed and kept inside with their human families anyway). Remove water sources. If you have a backyard pond, especially if it’s home to carp, secure chicken wire over the top. Remove resting areas such as thick shrubbery.

Fences are rarely a deterrent for any wildlife as they can climb or jump over, or dig under. However, there rare “rollers” that can be purchased for reasonable prices, that are installed on the top of fences. When a coyote, fox, or raccoon tries to get a foothold on the top of the fence to climb over, the roller spins and the animal rolls off outside the yard.

Another inexpensive and easily installed tool I’ve used is green wire rabbit fencing (available at any home improvement center) which I staple (inexpensive staple guns are also readily available) to the top of my six-foot wood privacy fence. The wire comes in various heights but can be used to extend the height of your fence. It’s wobbly too, so no animal can get enough balance to climb over it.

I’ve also installed the rabbit wire to my former chain link fence, but instead of stapling it, I used plastic fence ties (available at hardware stores) to secure it to the top of the chain link. If you have a long stretch you can easily put in intermittent tall metal fence posts and secure the wire to that. Once again, the wobbly wire prohibits a heavy animal from getting over. It also keeps fence-jumping dogs in the yard!

From a distance the wire is almost invisible and so isn’t an eyesore for your yard or to your neighbors. It also allows birds places to perch. None of these tools are expensive, are easily used, and only require the intitial installation time and effort on your behalf. Yet they can serve as vital barriers, which will protect your dogs if you can’t be with them as they patrol your yard in that final potty trip at night (a trip you should supervise and observe whenever possible).

Lights can be a deterrent, but for coyotes, don’t work as well. Coyotes are so smart they quickly “habituate” (get used to) our habits and routines. They may even come to associate the turning on of the back porch light to the fact that your dog is coming outside. They don’t actively hunt dogs for food but do see them as “competition” and invaders of their own coyote territory. Coyotes will even kill other coyotes if they invade claimed territory. Any canid species is a competitor in the coyote psyche. Strobe lights seem to work to some degree but don’t depend on only lights to deter coyote access to your yard.

In review, the best ways to avoid coyote/wildlife conflicts with your yard or neighborhood is to make your area a “less desirable habitat” and erect physical barriers to remove availability of access. We’re entering the mating time for coyotes (November, December & January), so increased activity will be observed in the coming months. Finding a mate, mating, and denning to prepare for pups will be uppermost priorities for the coyotes in your areas.

When the pups are born in January, February & March, coyotes will stick closer to their dens, hunt more actively and be more vigilant about protecting their den and territory. Most of the time, if you venture too close to a den (which is always well hidden), a parent will “escort” you away. This quiet, but staring accompaniment may be frightening for the neophyte pedestrian. If you find yourself in such a position, continue on your way without stopping, which may look like a challenge to the coyote. Then, for the coming months (usually May or June), find another route to walk. By then the pups will be weaned and out of the den, following their parents on hunts.

If you find yourself near a stationary territory and see active coyotes observing you, make sure your dog is always on a short leash and avoid the area until spring. Your dog is in more danger than you are, so don’t let him challenge the coyote. Canids protect their young–which is admirable–but you don’t need an ignorant pet dog hurt by a protective mom or dad coyote. Your job is to protect your pet, child and yourself, so don’t arrogantly challenge, approach, or try to make friends with, any wild animal.

Live and let live but use common sense. Conflicts between people and wildlife are rare and usually unnecessary. Observe the beauty of wildlife but realize they are not pets. They should be respected for what they are–wild animals; with the potential of dangerous behavior if motivated by stupidity in humans.