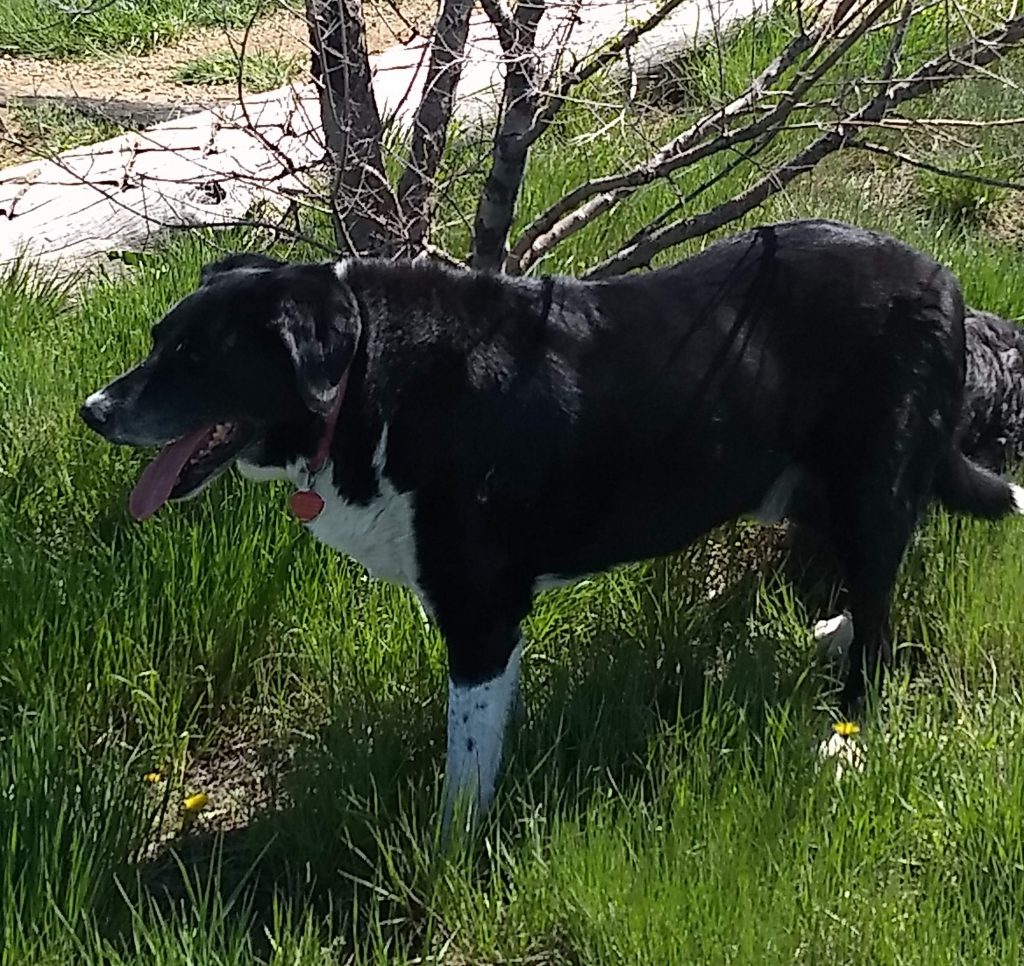 Jessie was scheduled for euthanasia as a “behavior problem”–a separation anxiety nutcase, a house destroyer, a crazy bag of bones abandoned. He came to me for behavioral rehab. His intelligence, sensitivity, and 100% reliability with all other animals and humans of all ages was almost missed–until he graciously showed me what he needed. I understood this was a dog with needs I could fill, as he could mine. I adopted him. With meaningful work, Jessie calmed and became focused. Soon he was my partner in any “job” I assigned him.

Jessie settled into my home for traumatized and fearful dogs, sick kittens, and unwanted adult cats. His stable personality attracted the flighty, brutalized, and anxious dogs I fostered. He assisted me in the socialization of feral dogs rescued by our shelter’s cruelty investigators. His large lab-mix size offered a physical barrier between the timid and me. Large or small, the victims of human terrorizing cuddled behind him as they learned to allow my presence, and then my touch.

Jessie illustrated to student dogs how to approach me on their own and receive rewards for doing so. He showed the shy how to eat canned dog food off my feet and knees (for those who had been kicked), and finally out of my hands (for those who had been beaten). They watched as Jessie sought my attention and scratches where no dog can reach on their own. They copied him as he led them onto unique substrates, into novel surroundings, and together they discovered new scents around our home and yard.

Finally, fearful fosters submitted to leashes and learned to enjoy walks—because their idol did. Courageously, the inexperienced ventured out into our park and neighborhood at the side of their protector. Each was eventually adopted into a loving, patient home and I continue to hear from adopters who thank me, but should thank Jessie.

Our shelter had an extensive humane education department, and I was an instructor for all ages of humans in both domestic and wildlife needs and issues. The kids of Critter Camp adored him and were thrilled to be able to “train” Jessie as they learned positive reinforcement techniques. They could safely hang on him and he soaked up the attention of so many children that photos show only his head poking out of tangles of tiny arms and smiling faces on top of tumbles of little bodies.

The shelter used Jessie in community events, fundraising, and printed promotional materials. He even starred in a television commercial featuring animal characters from canine, feline, avian, reptile, and cavy persuasions. Jessie was the “director”—wearing headphones, cool sunglasses, and in charge of the control booth filming, with his large front paw pushing the sliding action lever.

Jessie was the “comforter-in-chief” for homeless kittens. He magnanimously lay on the floor in my kitten room and allowed orphans of all sizes of to approach, climb up his round ribs, perch on his head, and swat at his slowly wagging tail (an amazing feat for any lab!). For adult cats he moved in non-aggressive movements until again, he lay on the floor and encouraged them to approach. Our cat and kitten fosters left our home ready to be successfully included in families of mixed species.

Jessie also served as a visitation dog with elderly residents of senior facilities, where his manners were gentle and effusive for people forgotten about in their own society. The lonely interacted with Jessie as he brought up long-ago memories of their own dogs in days they once actively shared with pets and people. He was one of the few dogs allowed in memory care centers where he benevolently faced dementia patients. He calmly dealt with pounding pats, subtle pinches, erratic movements, and verbal outbursts. He seemed to know that his equanimity could bring peace to the troubled minds and uncontrolled bodies of people whom age had ravaged.

Jessie was my muse–for my books, “Beyond Flight or Fight: A Compassionate Guide for Working with Fearful Dogs,” and, “City Dog Walking Safety & Etiquette.” He was the star of both books and provided motivation for me to try to make sure no other dog with such talent, love, and right to life, would be bypassed again.

In his youth Jessie was bright, fun, incredibly athletic, playful, and demonstrated a distinct sense of humor. Yet he was also empathetic and able to read what each animal or human needed from him. He embodied the best of all species—in patience, tolerance, respect, altruism, and loyalty. Jessie had the extraordinary ability to focus on anyone who needed him and became what was required—a rough-housing dog wrestling partner, a tender bodily shelter for the abused, a child’s humble companion, a mellow presence for fragile humans, a kitten climbing tower, and especially, a trusted best friend to me. I relished our partnership and knew how rare a dog Jessie was.

At the age of fifteen, his poor old body was ravaged by arthritis, dementia, deafness, blindness, and kidney failure. He died in my arms and under my tears. I was blessed with fourteen years of his remarkable love and companionship. Jessie was a once-in-a-lifetime dog, business partner, and life companion who never asked for more than what he gave. Although highly intelligent and easily trained, Jessie instinctively knew what cannot be trained and mastered the cognitive and emotional intelligence that is often missing—even in many people.

Jessie was the quintessential “working” dog—able to contribute to the human/animal bond in phenomenal and wide-spread ways. He left the world after making his influence felt as an impeccable ambassador for unwanted animals. He increased the humaneness in all who knew him. I am bereft without my Jessie, but the memories live on.

Not all “working dogs” have job titles. But all dogs find ways to give, if we humans give them the chance at life that each deserves. I was simply Jessie’s assistant. He did the hard stuff.